As we all know, and were somewhat disappointed, Kenny Chesney took the year off (at least, that was the original plan) to get back into the studio and focus on writing and recording a really good album after a string of albums that many described as being rushed. Kenny admitted that he was making albums to service the tour. So he decided to take this year off and make an album that he was really proud of. Earlier this summer, we started getting some details of the album. The name of the album, the album date, and when the first single off the album was released to radio, it skyrocketed to the top of the charts. ‘The Big Revival‘ will hit stores on September 23rd, but New England Country Music got an advanced copy of this highly anticipated album and we loved what we heard! Check it out.

1.) ‘The Big Revival’ – Written by Dennis Linde.
Impression: Kenny comes out strong with the ‘The Big Revival.’ Listening to this song, you simply get excited  thinking about Kenny’s stage presence to go with the sound and lyrics of this song. In my personal opinion, Kenny would be absolutely crazy not to open his shows next summer with this song. The song features some incredible music and sounds. And you may not get it from just listening to the song, but the lyrics feature a lot of religious undertones with mentions of the Lord, church, and reverend. The song was originally on Montgomery Gentry’s 2008 album, ‘Back When I Knew It All.’ It’s an incredible song, and although it was previously recorded by someone else, Kenny brings a new life to this song. He’s reviving the song just as he’s reviving his touring career.
Favorite Lyric: You won’t find many hypocrites that’ll take the chance on getting bit. But a true believer can survive rattlesnakes and cyanide…

2.) ‘Drink It Up’ – Written by Rodney Clawson, David Lee Murphy, and Vicky McGehee.
Impression: A good ‘ole drinking song by Kenny. He’s had some luck with these types of songs in the past (See: ‘Beer In Mexico,’ ‘You and Tequila’). Definitely a country song with some rock influences about living your life to the fullest and having a good time while you can.
Favorite Lyric: Cuz’ you only get so much lightning in the bottle, only so many times you get to feel like this. Light it up, burn it down, that’s what life’s all about…

3.) ‘Til It’s Gone’ – Written by Rodney Clawson, David Lee Murphy, and Jimmy Yeary.
Impression: Another song that gives you a real positive vibe to enjoy your life and take advantage of the time you have. In the song, he is dancing with a girl, breaking rules, and wearing off her lipstick and wants to keep going ’til the night is over.
Favorite Lyric: One life, one chance. One ticket to the Big Dance. You and me, still holding on, right down to the last song…

4.) ‘American Kids’ – Written by Rodney Clawson, Luke Laird, and Shane McAnally.
Impression: My opinion doesn’t really matter here. ‘American Kids’ was the first single off the new album and after it was released on June 20th, it soared up the charts hitting number one on the Country Airplay charts. Fans responded fast and loud to ‘American Kids’ with 40,000 downloads in the first three days, 74,000 downloads in the first week, and over 800,000 downloads in the US since then. For many people, it was the song of the summer and rightfully so. The song is playful and fun and it relates to many which is one of the biggest things for any songwriter. When it’s all said and done, ‘American Kids’ will go down as one of Kenny’s biggest songs in his career.
Favorite Lyric: We were Jesus save me, blue jean baby; Born in the USA. Trailer park truck stop, faded little map dots, New York to LA…

5.) ‘Wild Child’ featuring Grace Potter – Written by Kenny Chesney, Shane McAnally, and Josh Osborne.
Impression: Vermont native, Grace Potter, once again joins Kenny on one of his songs. She previously was featured on Kenny’s ‘You and Tequila,’ which was a track off of his 2010 album, ‘Hemingway’s Whiskey.’ It’s his response to bro-country as in the song he’s writing a letter to a girl that’s smart and interesting, and not sitting in a bikini on the back of a tailgate, that she has a chance. (I wonder if Maddie and Tae had any role in this song?) But we do know that Kenny thought of New England a little bit when he was writing this song. He recently told People Magazine, “All the women that have been in my life – in my family or that I chased, fell in love with and out of love with, my island friends, my hippie New England friends – they all had this idea of the ‘wild child’ in them, and I thought about all of them when I was writing the song.” It’s a great song and one for the ladies to be confident and strong and not to conform to public norms.
Favorite Lyric: Got a rebel soul, with a whole lot of gypsy wild style. She can’t be tied down…

6.) ‘Beer Can Chicken’ – Written by Kenny Chesney, Ross Copperman, and David Lee Murphy.
Impression: This song is all about the little things in life that make it worth living, including beer can chicken. If you’ve never had a beer can chicken, you’re missing out! Kenny co-wrote this song with his old pal, David Lee Murphy, who also wrote some of Kenny’s other songs including ‘Pirate Flag’ and ‘Living in Fast Forward.’ Kenny continues his string of songs about living life to the fullest and appreciating life.
Favorite Lyric: It’s like Friday night, working on a three day weekend. Something in a jar, just made for sipping…

7.) ‘Rock Bottom’ – Written by Matt Dragstrem and Craig Wiseman.
Impression: This is a rocking country song with a ton of guitar. In the song, a guy finds a note from his girl saying she is leaving and he hits rock bottom after a few drinks.
Favorite Lyric: This old hillbilly, playing stardust Willy, wasn’t even getting off the ground…

8.) ‘Don’t It’ featuring Alison Krauss and Dan Tyminski – Written by Brent Cobb and Chase McGill.
Impression: ‘Don’t It’ is easily the most mellow song on the album and has a very traditional country music sound on it, especially with bluegrass icons Alison Krauss and Dan Tyminski featured on the track. The song talks about a bunch of things going wrong but life keeps you going and moving on.
Favorite Lyric: It’s a trip, it’s a bitch, it’s an on and off light switch…

9.) ‘Save it for a Rainy Day’ – Written by Andrew Dorff, Matt Ramsey, and Brad Tursi.
Impression: What would Kenny do after a breakup? Probably go to the beach. In this song, he is fresh off a breakup but it’s too nice of a day to sit around and sulk or even talk about her; he’ll save that for a rainy day. It’s one of my favorite songs on the album. It’s very Kenny and very upbeat.
Favorite Lyric: The sun’s too bright, the sky’s too blue, the beer’s too cold, to be thinkin’ about you…

10.) ‘Flora-Bama’ – Written by Kenny Chesney, Ross Copperman, and David Lee Murphy.
Impression: ‘Flora-Bama’ was the second single released off of his new album and was done so right before his enormous show at the Flora-Bama in August. I was down at the Flora-Bama for that show and Kenny has it right in this song. The decor, the vibe, the attitude. Everything. If you want to go to a legitimate beach bar and have a damn good time, head down to Perdido Key and check out the Flora-Bama. But if you can’t get there, just listen to this tune.
Favorite Lyric: Bout to open up a big old can of good times, unwind; Fall in and out of love in the same night. Can’t say I got a whole lot of cares, I’m in the redneck riviera… 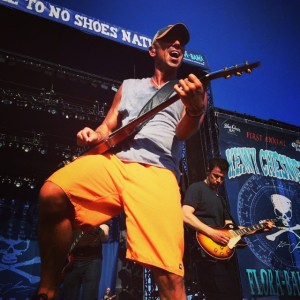 11.) ‘If This Bus Could Talk’ – Written by Kenny Chesney and Tom Douglas.
Impression: This song is a tribute from Kenny to his fans and his career. Kenny has done everything and toured at nearly every major arena, stadium, and amphitheater in the United States. And he probably has thousands of stories to go with it all and if his bus could talk, it would have some stories too. It’s a great way to end the album and after taking a year off from touring, I think Kenny is ready to come back and give his bus some more stories and memories.
Favorite Lyric: We were starry-eyed dreamers, bouncing off the walls, oh the stories he could tell, if this bus could talk..

Kenny Chesney’s ‘The Big Revival‘ is his revival back into the country music scene. It is going to rejuvenate him and his tour with a shot of brand new and incredible music. The album will be the best one he has released since ‘Hemingway’s Whiskey‘ and the best one out of the ten albums he has released in the past twelve years. With Kenny’s rabid and devout following, his absence from music this summer, and this incredible album, ‘The Big Revival‘ will undoubtedly reach the top spot on the country album charts and should have no problem reaching platinum status by the RIAA.

Make sure you stay up to date with all things Kenny Chesney related! Between his Twitter, Facebook, and website… plus New England Country Music, you should be covered!

You can pre-order ‘The Big Revival‘ on iTunes here.