KENNY CHESNEY AND JASON ALDEAN MOVE 110,000 TICKETS IN 12 MINUTES FOR THE SUPERSTARS’ RETURN TO BOSTON

NASHVILLE, Tenn. (Oct. 29, 2014) – The tradition continues in New England for Kenny Chesney and Jason Aldean as they have sold out two nights at Foxboro’s Gillette Stadium — ten months in advance – in just under a dozen minutes. These latest sellouts mark Chesney’s 12th and 13th sold out shows at Gillette Stadium, birthplace of the No Shoes Nation.

“Let’s do it, Boston!” said Aldean.   “When we first started talking about doing stadiums together next summer, Kenny and I circled Foxboro on the map and made it top priority.  It’s going to be a long winter waiting on this one!”

“Boston… You guys knock me out!” Chesney said when reached with the news. “Your passion for life, music and rocking inspires me more than you even know. I can’t believe it’s gonna be ten months ‘til I get there. But hearing this, man, I’m gonna be so ready when I get there.”

Chesney has always had a special love affair with Boston. He created the Spread the Love Fund to aid the amputee survivors of the Boston Marathon bombing, as well as helping sell out Farm Aid when it was outside Boston. The years of multiple Gillette Stadium shows created enough talk amongst his camp the No Shoes Nation was named there, commemorated with a Super Bowl-style banner, which hangs in the end zone. 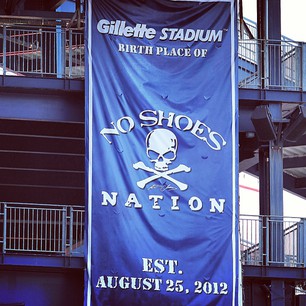 For Aldean, Boston fans hit a grand slam for the superstar last summer when he sold out two nights at the iconic Fenway Park in just minutes with the Boston Globe noting the show was “a barn burner…professional, polished…full of big beats and brawny riffs.”  That same year, Aldean and his smoking five-piece band also performed at the Boston Strong concert to benefit the victims of the Boston Marathon bombings alongside Aerosmith, James Taylor and Jimmy Buffet.

Chesney, a 4-time Country Music Association and 4-consecutive Academy of Country Music Entertainer of the Year, is the only country artist in the Top 10 on Billboard’s Top Touring Acts of the Last 25 Years; impressive given headlining began in 2002. Deemed “The King of the Road” by The Wall Street Journal, his summer concerts are legend.

Reigning ACM Male Vocalist Of The Year Aldean has one of the year’s top selling albums in all genres with his latest release Old Boots, New Dirt.  He is also known for high intensity shows, sense of true grit and songs that capture the way his fans genuinely live their lives. The triple-platinum seller and country music’s most downloaded male artist in history has extended his Burning It Down Tour into 2015 with 23 dates, starting in Greenville, South Carolina February 12.

Academy of Country Music Top New Artist Brantley Gilbert, who has hit #1 with ‘Country Must Be Country Wide,’ ‘You Don’t Know Her Like I Do’ and ‘Bottoms Up,’ will bring his own brew to Foxoboro – as well as fellow songwriter/emerging artist Cole Swindell who hit #1 with both ‘Chillin’ It’ and ‘Hope You Get Lonely Tonight.’