Sunday September 13th was cloudy and rainy, but that didn’t stop Randy Houser from putting on a great show at the Maine State Pier in Portland, ME. Randy, along with Dustin Lynch and Jillian Cardarelli kept the crowd entertained despite the gloomy weather.

Massachusetts native Cardarelli opened the show with a cover of Carrie Underwood’s ‘Undo It,’ before launching into an original song, ‘Just Another Sundown.’ She also performed the title track off her EP, ‘Rest In Pieces,’ as well as another original, ‘Something to Go On.’ Jillian told the crowd, “I’m a big classic country fan and Brooks and Dunn have always been one of my favorites,” before singing her “all-time favorite” Brooks and Dunn song ‘Neon Moon’ that had the crowd singing right along with her.  She treated the crowd to an upbeat new song that she wrote “about two weeks ago” called ‘Lipstick.’ Later, she ended her set asking the crowd to sing along with her as she performed Garth’s hit, ‘Friends in Low Places.’ 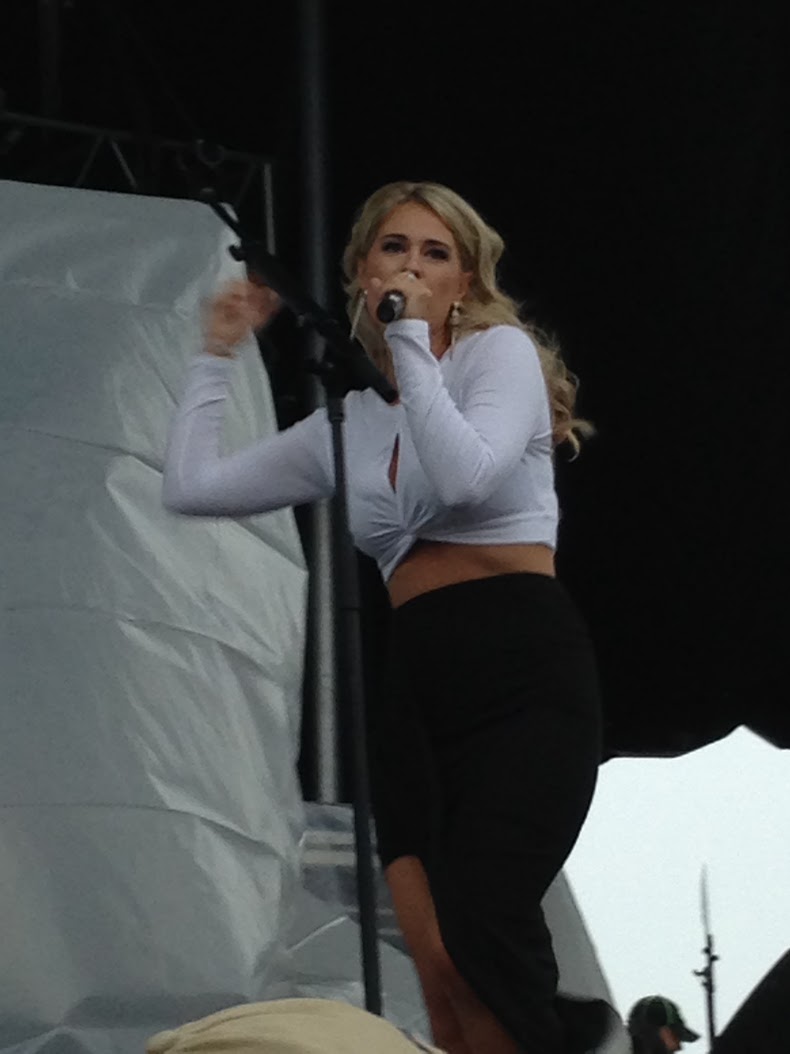 Dustin Lynch took the stage next singing songs like ‘She Cranks My Tractor’ and ‘Halo,’ before telling the crowd he wanted to take things back to the nineties to “get this party started.” He went on to sing Joe Diffie’s ‘John Deere Green’ and Diamond Rio’s ‘Meet In The Middle.’ The crowd really got going when he said he wanted to “see some boots a scootin’ on this pier” as he launched into Brooks and Dunn’s hit, ‘Boot Scootin’ Boogie.’ Fans screamed as Dustin asked “have we got any wild girls out here?” before singing ‘Wild In Your Smile.’ Dustin said, “thank you guys for choosing to come watch a country show and get drunk and dance instead of watching football at the bar.” 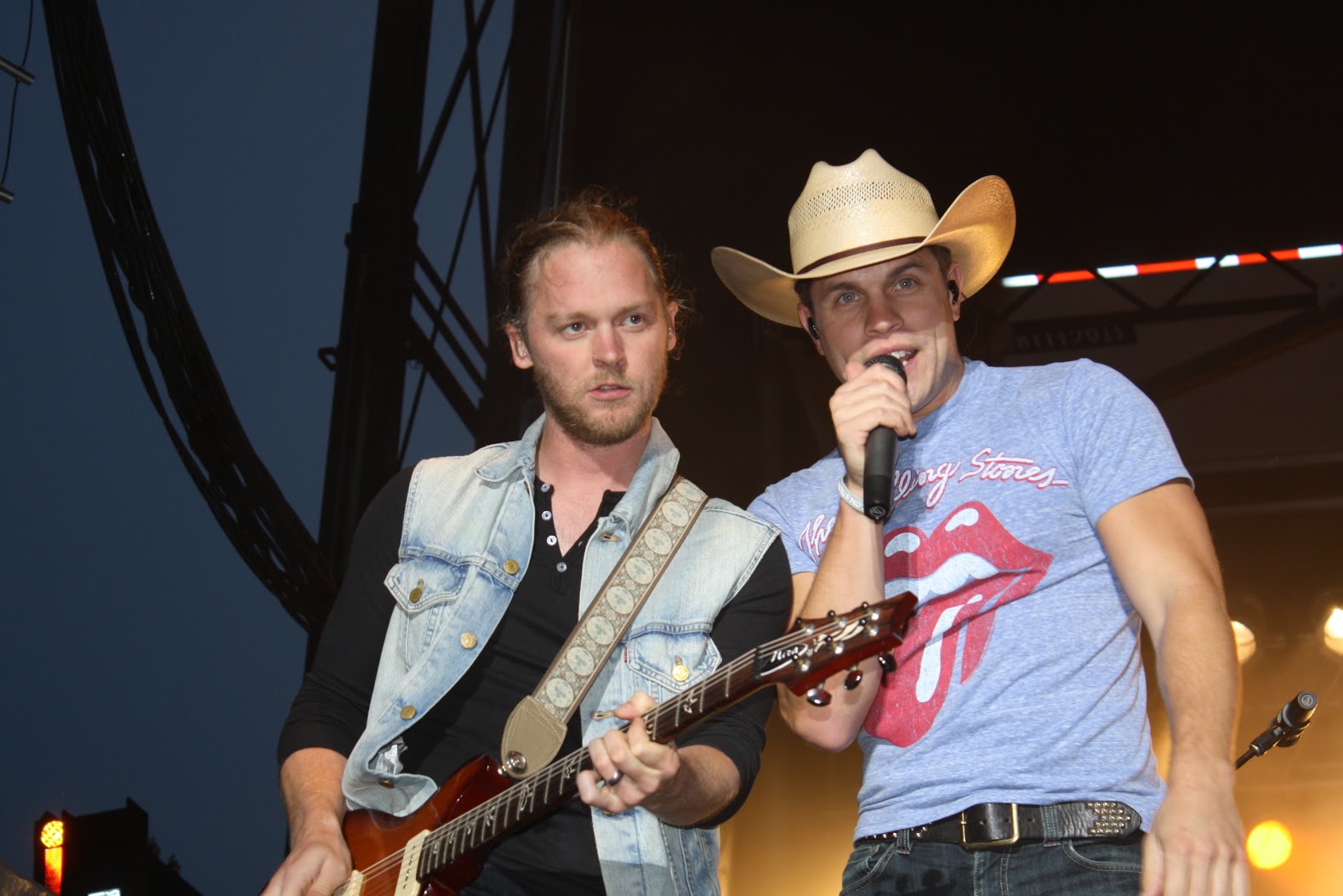 Dustin then slowed the tempo down and told the crowd “you’re watching five dudes on stage living the dream tonight, and it’s all because y’all love country music so thank you so much.” He went on to say, “I wrote this next song about my grandma and my granddad. They’ve been married 60 years this year, and this is their love story.” The crowd sang along with him as he performed ‘Cowboys and Angels.’ He went on to sing his second #1 song, ‘Hell of a Night,’ before saying, “this is one of the coolest stages we’ve ever got to play in our careers.” He ended his set with his hit ‘Where It’s At.’ 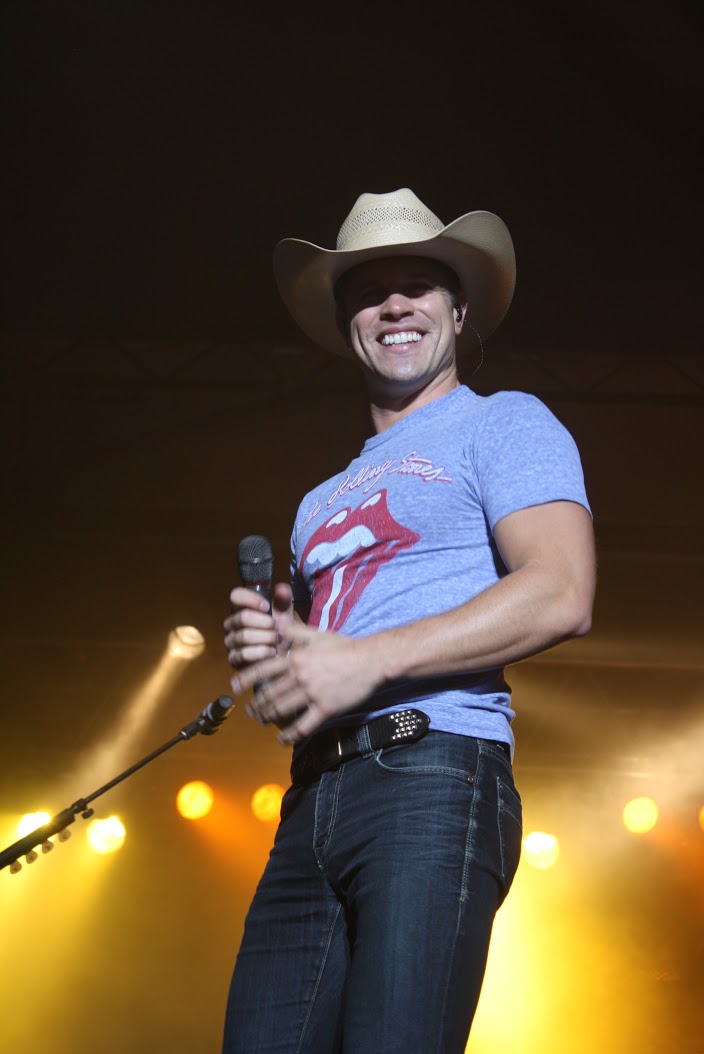 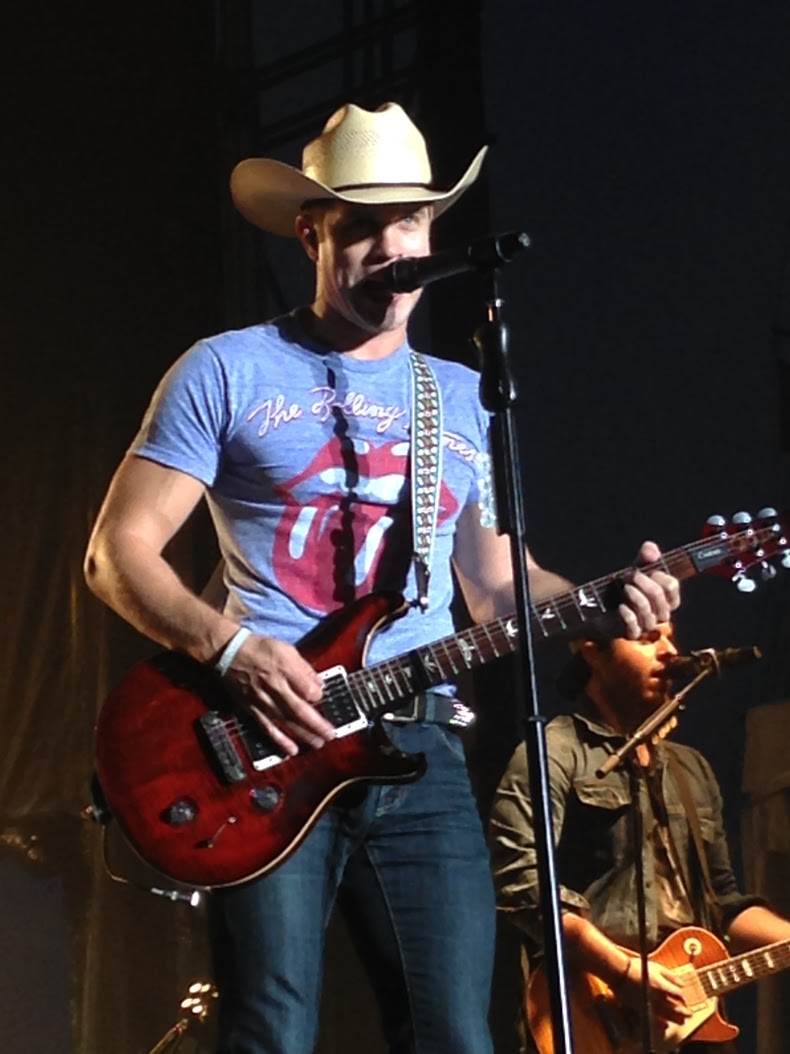 There was a short intermission before it was Randy’s turn to take the stage. The stage crew took this time to put up a tarp to try and keep some of the rain from blowing in on the band.

Shortly after 8pm, it was finally time for Houser to take the stage. The rain was coming down hard at this time and the crowd was ready. Randy came out to his hit ‘Boots On.’ After finishing the song, he proceeded to remove his boots and socks and was barefoot the rest of the show. He told the crowd “there’s a 1% chance of me not busting my ass.” It didn’t slow him down any as he went into the next song singing ‘Growin’ Younger,’ ‘How Country Feels,’ and his latest single ‘We Went.’ 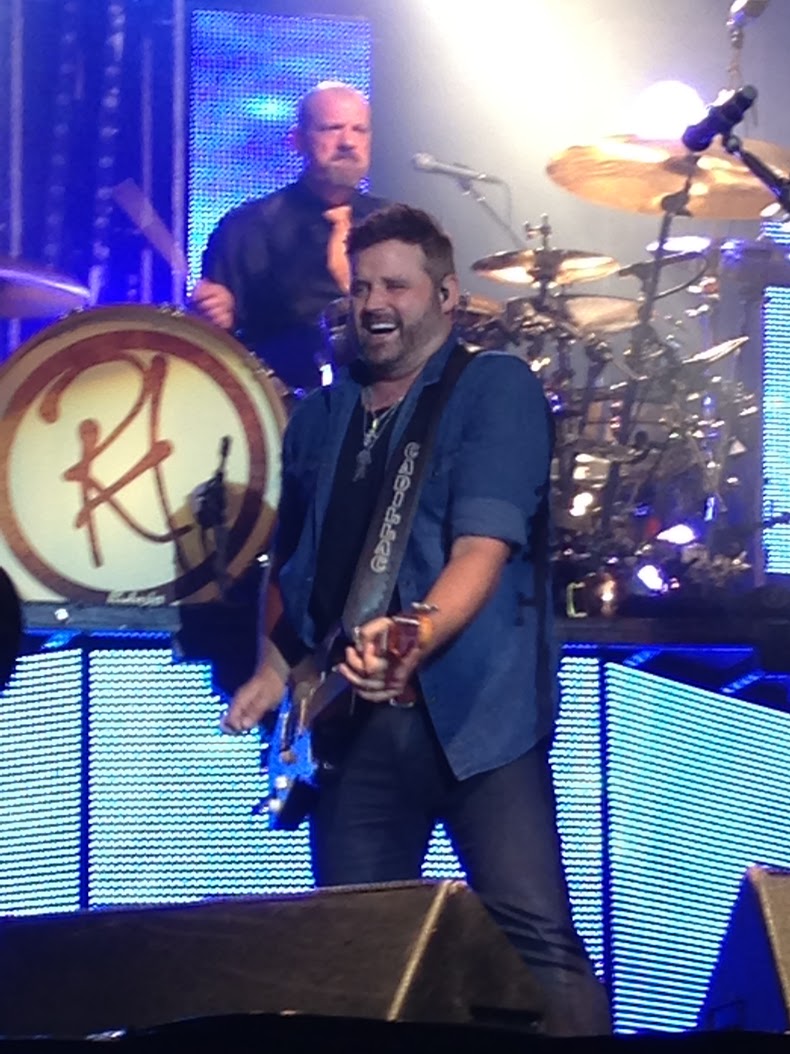 Randy didn’t let the rain stop him, as he was smiling and yelling “I love y’all!” to the crowd. He sang song after song including ‘Goodnight Kiss’ and ‘My Kind of Country.’ “I always experience different things when I make it up to Portland, ME. Today I ate oysters for breakfast. I don’t think I’ve ever done that before. It’s the first time I’ve ever played a whole show barefooted, so we’re making history tonight!  The thing is I want to stress to y’all is one more time, how much I appreciate y’all hanging out in this crappy weather to let us play our music for y’all tonight. Thank you so much Portland, ME!”

He continued on to tell the crowd he wanted help singing this next song. “I just found out and I’m very honored, it’s so cool to be recognized at the CMAs and this song came up for Song of The Year, y’all. Good Lord! It’s so cool!” After singing his hit ‘Like A Cowboy’ and then ‘Whistlin’ Dixie,’ Randy and his band left the stage and the lights went out. After a few minutes, Randy came back out to sing a brand new song, ‘Little Bit Older, Little Budweiser,’ and ended the night with ‘Runnin’ Outta Moonlight.’

Randy didn’t let the rain slow him down any, he just took off his boots so he wouldn’t slip and fall and kept on going. He is a great entertainer and kept the crowd engaged the entire show as they were singing right along with him. 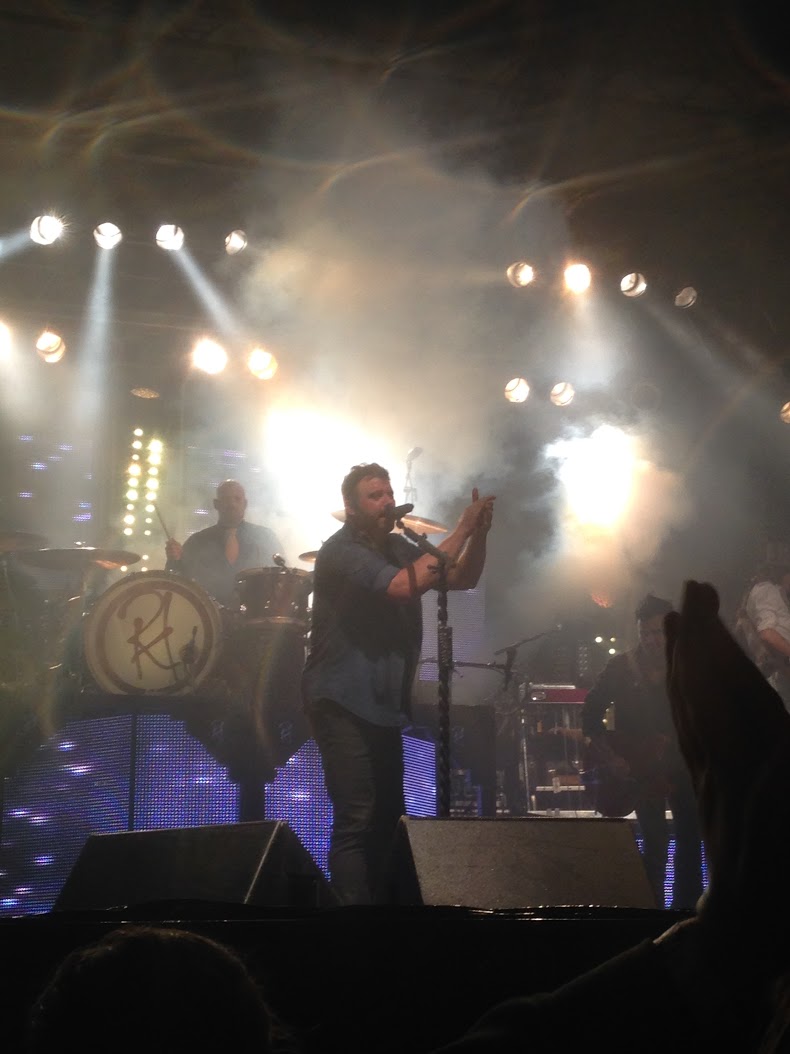