We’re just days away from Super Bowl LIII. Our New England Patriots will be facing the Los Angeles Rams at the Mercedes Benz Stadium in Atlanta, Georgia on this coming Sunday evening. While I’ll be watching for the game, many others tune in for the commercials and many others tune in for the halftime concert. And this year will be no different. But the NFL had the chance to do something they hadn’t done before for a Super Bowl halftime show- country music.

There are very few NFL stadiums in the heart of American where country music lies supreme. Obviously, Nashville is number one. But behind Music City, Atlanta probably is next in line to be home to an NFL franchise AND have thick roots in country music. And Nashville will probably never host a Super Bowl. No offense to Maroon 5, Big Boi or Travis Scott, but c’mon NFL, pay homage to country music for once. Atlanta was the perfect Super Bowl host to do it- unless you decide to play with Mother Nature again and grant Nashville a Super Bowl- which is unlikely.

And who could the NFL have tapped from country to put on one helluva Super Bowl… Well, we’ve been lobbying for Kenny Chesney to play the Pepsi Halftime Show for years. He is one of the few artists of any genre who can headline and sell out NFL stadiums across the country every summer. And let’s face it, he may already have plans to be in the building as he has strong ties with Robert Kraft and the Patriots organization. He was seen in Mr. Kraft’s suite in past Super Bowls.

But there’s also a plethora of Georgia born and bred country artists that would put on a great show. Alan Jackson and Travis Tritt are two icons that come to mind. And we know the argument will be that traditional country would struggle on national television because a lot of people don’t like country. But guess, what!? A LOT OF PEOPLE DO LIKE COUNTRY.

And if that is the argument, we can all be real here. Country music as played on country radio today definitely straddles the genre lines with influences and sounds of pop, rock and hip hop. So why not take modern country artists who flirt with other genres!? Again, the list artists from Georgia who are ruling in the modern country world but can appease the masses is pretty long. Artists like Cole Swindell, Sam Hunt, Thomas Rhett, Brantley Gilbert, Kane Brown, Kip Moore, Jason Aldean and Luke Bryan, to name a few. Hell, throw Florida GEORGIA Line out there with Bebe Rexha to perform their 2018 smash hit, ‘Meant To Be.’ Give us SOME country music.

The last time that the NFL had a halftime show that exclusively featured country artists, it was 1994. Yes, 25 years ago. Seems like long enough. That show featured Travis Tritt, Tanya Tucker, Clink Black and The Judds. And only fittingly, that Super Bowl was also in Atlanta! So 25 years later, we’re back in Atlanta for a Super Bowl…

Nearly every year, the NFL has pop stars playing the halftime show. Let’s change it up. If there was any Super Bowl to feature some of country’s biggest stars, it was this weekend. Here we are 25 years later, we’re back in Atlanta for a Super Bowl. What better year could it have been to have had a country halftime show.

The truth is… the NFL dropped the ball here. Pun intended.

We have been waiting for some new music from country stars Tyler Hubbard and Brian Kelley of Florida Georgia Line since their last release, ‘Dig Your Roots’ in 2016. The Platinum certified hits ‘H.O.L.Y.,’ ‘May We All,’ and ‘God, Your Mama, And Me’ were all born off that album. In the time since their last album, this dynamic duo has been busy cranking out collaborations with artists such as The Chainsmokers, Morgan Wallen, and Bebe Rexha. On June 1st, Florida Georgia Line gave fans a glimpse into their fourth studio album by dropping their hot new single ‘Simple.’

‘Simple’ was penned by Tyler Hubbard and Brian Kelley of FGL alongside Michael Hardy and Mark Holman that has a definite warm summertime vibe. The joyful sounds of whistling at the beginning lead the listener to a banjo-filled melody. Similar to the way Aretha Franklin belted out R-E-S-P-E-C-T in her 1967 hit, S-I-M-P-L-E is spelled out by Hubbard and Kelley in this tune. Though far from the fifty-year-old classic and with a sound all its own, ‘Simple’ is a modern, feel-good country song about being in love and realizing that it’s important to take a break from the modern ways of 2018 and live a simpler life. Florida Georgia Line’s Brian Kelley told WFMS 95.5: “We just feel like it’s the next step for FGL. It has a fresh sound and it’s just a good time to put it out. It’s a good time to live simply as much as things can get complicated.” The pair sings: We used to live on Instagram. Worry ’bout who all gives a damn. ‘Bout where we’ve been and where we ended up. Then I met you and you met me. And all the rest is history; an epiphany…That all we need is us. ‘Simple’ is one of those songs that turns your frown upside down and just puts you in a good mood!

Florida Georgia Line wrapped up their huge 2017 The Smooth Tour with Nelly and The Backstreet Boys. They recently played at CMA Fest and Colorado’s Country Jam. Sadly, FGL does not have any New England visits scheduled for summer 2018. Here’s hoping we catch them in our neck of the woods this fall.

Favorite Lyrics: It’s like one, two three. Just as easy as can be. Just the way you look at me. You make me smile.

You can purchase ‘Simple’ on iTunes here.

The 2018 MLB season has arrived and the season opener for the Boston Red Sox at Fenway Park will be today, Thursday, April 5th, but baseball isn’t the only thing that is played at the oldest major league ballpark in the nation. Country music has made its mark in Boston in recent years and what other way to spread the love of country music but to have a concert at the ball park.

Here are some of the country artists that have had the opportunity to perform for their fans at Fenway Park.

In July 2013 Jason Aldean made history by being the first country music star to play a concert at Fenway Park. Due to the selling out of his first night, of the 2013 Night Train Tour (with Miranda Lambert, Jake Owen and Thomas Rhett) in just seven minutes, a second show was added. Aldean followed up his 2013 appearance at the iconic ball park with another concert in September of 2016 when he performed for another two nights on his The Six String Circus Tour (with Kid Rock, Thomas Rhett and A Thousand Horses). “We’ve had this show circled on our calendar for quite a while,” said Aldean to cheers, “and I know you Bostonian’s have been drinking Sam Adams all day to get ready for this.” Jason was joined by Kid Rock for his 2016 show. 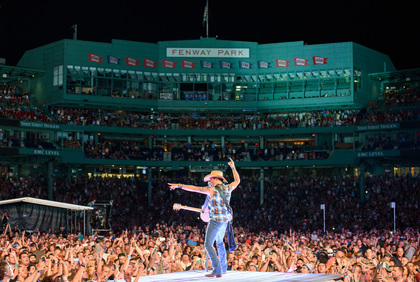 Of all the country acts that have had the pleasure of playing at Fenway, the Zac Brown Band wins for the most appearances. In June 2014 The Zac Brown Band’s, The Great American Road Trip Tour played two nights to a sold-out crowd of 70,000 people. ZBB played for over 2 hours and sang 30+ songs. Because their 2014 shows were sold out and so successful ZBB decided to return to Fenway park the following year in August of 2015 for their Jekyll + Hyde tour. They performed for over 100,000 fans during the 3-day event. In August of 2016, ZBB came back to Fenway Park with the, Black Out the Sun Tour, for another two nights of country music. This event made Fenway Park history with the most tickets sold at a single concert, the most tickets sold over two nights of concerts by the same artist and the first band to sell-out seven consecutive shows over three years at the ballpark.

After skipping 2017 the ZBB will return to Fenway park in June 2018 for their Down the Rabbit Hole Live Tour. They will play two nights Friday June 15th and Saturday June 16th.

Florida Georgia Line headlined the first-ever stadium concert of their career July 7th 2017 at a sold-out show at Boston’s Fenway Park for their Smooth Tour. Joining FGL for their stop in Boston were the Backstreet Boys, Nelly and Chris Lane.

Adding to the list of famous country acts to have the opportunity to play at America’s Favorite Ball Park is four-time Entertainer of the Year Luke Bryan. Bryan and his band are set to rock the historic ballpark on July 6th as part of their What Makes You Country Tour.  Joining Bryan will be superstar Sam Hunt, along with the award-winning Jon Pardi and the up-and-coming Morgan Wallen. Bryan had this to say about his stadium tours; “My excitement to play these iconic sports stadiums is truly uncontainable,” said Luke.  “Playing my music live is the reason I do what I do and the energy of the FANS is what pushes me year after year to deliver a bigger and better experience.  I’m so thankful to be in these venues and cities with some of the brightest names in country music. This lineup fires me up and I can’t wait to get this tour started!” 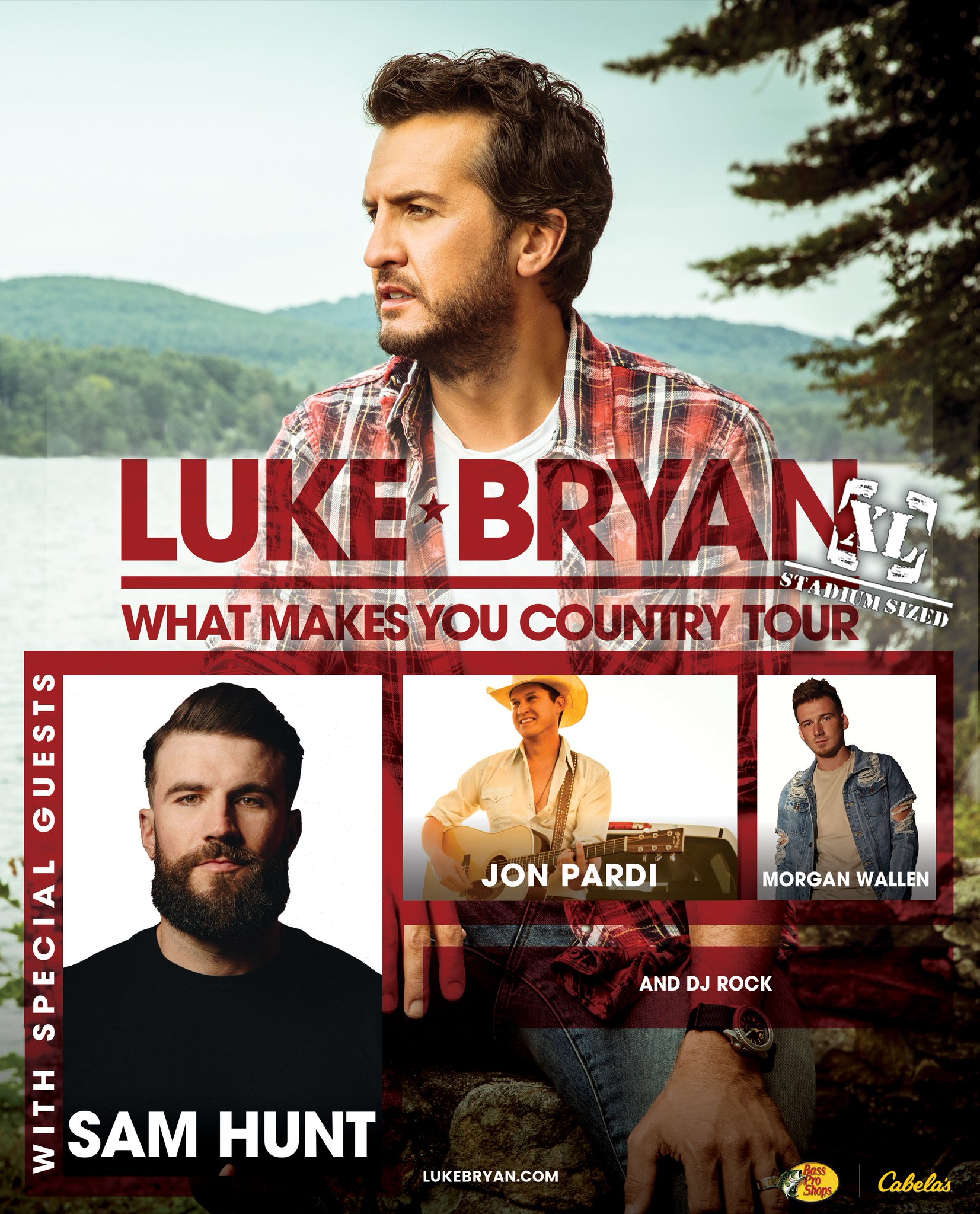 It’s exciting to see that country musicians are energized about performing at one of America’s oldest and most beloved ballparks and I’m sure there will be more country artists joining the ranks in the years to come.