Just a few weeks ago, 140,000 people flooded Kenny Chesney’s website in less than 5 minutes which caused massive errors. People who received tickets were later told that they didn’t have tickets and people who didn’t receive tickets were told that they did. Two words: mass chaos. The original plan was approximately 15,000 fans on the beach in Perdido Key on the Florida-Albama line at the Flora-Bama Beach Bar. But Kenny did not want to disappoint another 15,000 fans so after receiving approval from the local governments in both Florida and Alabama, the confirmation came out that he would honor all fans who were part of the process. On Saturday, over 30,000 fans flooded the enclosed beach area around the stage with a little over 10,000 more in the area. People lined the balconies in the condominium buildings overlooking the stage, as well as each floor in the parking garage. Over 300 boats lined the shore near the stage with thousands of fans taking in the show from the water. What was meant to be a show smaller than most amphitheaters turned out to be a show nearly the size of one of Kenny’s stadium shows that he usually does every year. It was truly an unforgettable day and I bet a day that Kenny will never forget. 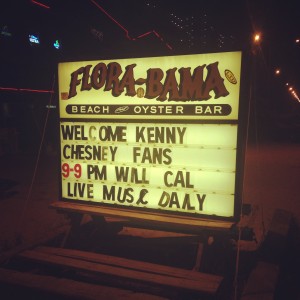 I got there just before 5AM and I was not the first person in line. There were about 15 people in line at the entrance I was at, so I knew I would be close to the stage. Being together all morning, we became friends with the people around us and looked out for each other throughout the day (Alex, Courtney, Andrea, Ashley, Karia, John, David, Clare, Kathy, Deanne, Misty, and others- you guys rock!). As the morning went on, the line kept getting longer, and longer to the point where we couldn’t even see the end, and the shuttles that the concert had arranged from different locations hadn’t even started yet.

As 10AM grew nearer, which was the time that gates were set to open, the crowd was getting restless. People were scheming how to get as close to the stage as possible. When gates opened, it was a mad dash. Think about the people at Best Buy on WalMart but crazier. As we entered the enclosed area where the stage was, it was awesome. The massive stage was cloaked in ‘No Shoes Nation’ banners with Kenny’s infamous skull and crossbones logo as well as some banners specific to the Flora-Bama Jama. Throughout the sand there were wooden flag poles with ‘No Shoes Nation’ flags as well as flags from the University of Tennessee, University of Alabama, University of Florida, Auburn University, Mississippi State, Ole Miss, LSU, and University of Georgia. A large video screen adorned each side of the stage as well as another large jumbo screen towards the back of the enclosed area where people sitting back there could see watch. There was also a lot of television cameras and equipment as CMT was there filming for a CMT special that will be aired at a later date.

The weather was hot, and the sun was strong. But that was expected in Florida, right on the Gulf of Mexico, in mid-August. The Flora-Bama had provided a stand where you could fill up water bottles for free. Also, the local fire department came with their fire hoses and sprayed the crowd down on multiple times. Great American Country’s Storme Warren was unofficially appointed as the safety officer and came on stage multiple times leading up the show encouraging people to drink enough water and stay hydrated, as well as to look out for each other. For the most part, it seemed that the majority of people were doing the right thing but there were definitely some people who needed medical attention. Along the coastline, thousands of fans who did not get wristbands were still able to enjoy the show. Over 300 boats dropped anchor in the area with thousands of people on floats or just bobbing in the ocean. There was even a pirate ship! (You can see it in the main picture near the top right corner.) Kenny called them the ‘No Shoes Navy’ Right at 5:00, Kenny Chesney took the stage in orange shorts, a grey Blue Chair Bay rum cutoff t-shirt, ball cap, and sneakers. The first thirty seconds or so was simply Kenny greeting his fans that he hasn’t seen in almost a year. He was waving to the crowd, blowing kisses, and saying “thank you,” before starting the night with ‘Flora-Bama’ which is a newly released song from his upcoming album. Throughout his two and a half hour performance, he performed songs from his new album, such as ‘Flora Bama’ and ‘American Kids,’ as well as a bunch of classics. Some of the songs he performed from past albums included ‘Reality,’ ‘Summertime,’ ‘Somewhere With You,’ ‘When the Sun Goes Down,’ ‘You and Tequila,’ ‘Pirate Flag,’ ‘Beer in Mexico,’ ‘No Shirt, No Shoes, No Problem,’ ‘When I See This Bar,’ and ‘Out Last Night.’ He also brought out special guest and co-writer of ‘Flora-Bama,’ as well as other numerous singles sung by Chesney, David Lee Murphy. Together they performed ‘Dust On the Bottle’ and ‘Party Crowd.’ 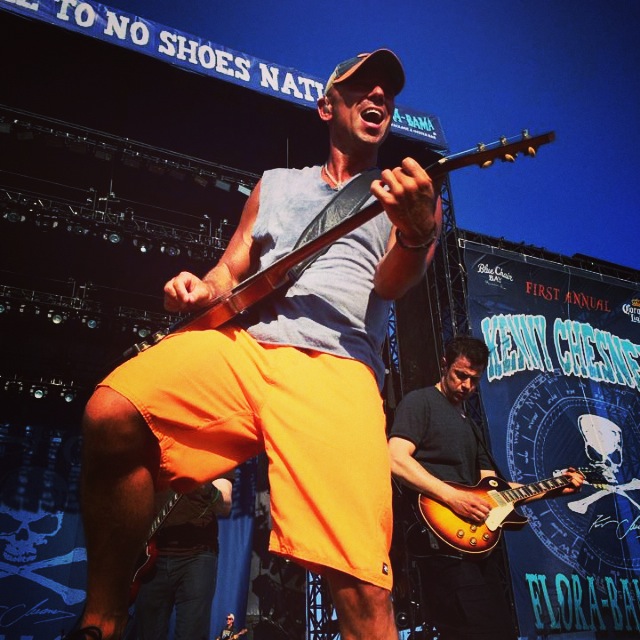 Kenny ended his night with ‘Boys of Fall,’ and despite being on the beach and not in a football stadium, as he usually is at this time of the year, he still gave away a signed football helmet to a young fan. After walking around the stage showing everyone the black ‘No Shoes Nation’ helmet signed by the singer, and looking for a fan, he chose a  young girl and brought her to the stage. He then put the helmet on her before she jumped around the stage ecstatically and he gave her a giant hug and spun her in a circle. 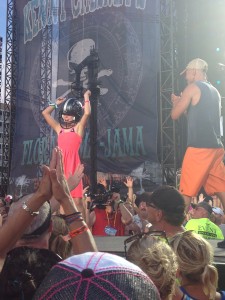 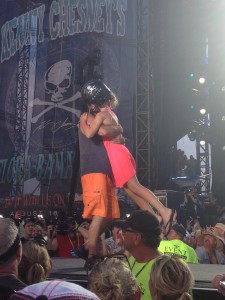 After leaving the stage briefly, Kenny returned for a one-song encore of ‘She Thinks My Tractor’s Sexy’ which was a hit with the crowd. As the song concluded, his band members continued to play the instrumental portion of the song while Kenny walked around the stage for several minutes signing autographs for fans. Despite packing in what should have been at least three months of preparation and planning into three weeks, the show was a success. Kenny did his thing, played a great show, and made thousands of fans happy and even more memories for everyone involved. It was definitely apparent that he may not been in ‘tour shape’ as there were multiple times where he was catching his breath. But that’s not surprising as the 46 year old singer took the year off from touring and the conditioning he undergoes during those long stadium tours. Logistically, there is a ton to improve on if this is an annual thing, as I think it will as it has been advertised as the ‘first annual.’ If there are more Flora-Bama Jamas in the future, I highly recommend going. (There are some reports of a five year contract between Kenny and the Flora-Bama.) The weather was nice, Perdido Key was beautiful, the staff were polite, and the music was fantastic.

We have more videos on our YouTube channel, and also on our Instagram page. Special thank you to Courtney and Andrea for all your help!