Saturday night brought cool temperatures in the mid to high 70’s to the Xfinity Center, but those cooler than normal temps didn’t last long as Keith Urban, Jerrod Niemann, and Bret Eldredge turned up the heat!

The back to back number one singles, ‘Don’t Ya’ and ‘Beat of the Music’ (from his album ‘Bring You Back’), star Brett Eldredge returned to MA one year after performing at WKLB’s first Street Party. He opened up a highly anticipated and long night of music, getting the crowd ready for Jerrod Niemann and Keith Urban.

Battling the setting sun, Eldredge didn’t let that stop him. He was fun to watch never standing still for more than a minute, jumping and running all over the stage. He did, however, slow things down long enough to sit on a bar stool with an acoustic guitar and treat us to a new song from his album, ‘One Mississippi,’ a romantic ballad about heartbreak, allowing us to enjoy his smooth deep voice. He had his audience captivated.

Eldridge’s rendition of Frank Sinatra’s ‘Fly Me to the Moon‘ had the crowd cheering. Eldredge ended his set with his first number one hit ‘Don’t Ya.’ It was hard to tell who was actually singing the song- Eldredge or his thousands of fans in the audience. 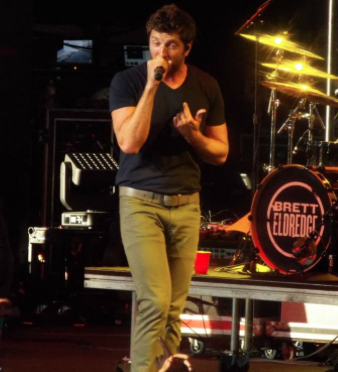 Not to be outdone by Eldredges exuberance, Jerrod Niemann opened his set with his number one hit single, ‘Lover Lover,’ from his album  ‘Judge Jerrod & the Hung Jury,’ while throwing t-shirts out to the crowd.

While holding up a blue Solo cup, Niemann was getting ready to sing, ‘One More Drinking Song,’ but not before he told us a story about a couple who introduced him to their young son.

When Niemann asked the couple what the story was behind the baby. They told him that on the night they had seen him perform last year was the night they had conceived their son. Niemann went on to joke about drinking and making babies and to honor the couple and their son he asked C. T. Blackmore on saxophone, and Will Elliott on trombone, to play the ‘Family Guy’ theme song, much to the amusement of the crowd.

Niemann continued his set with his top ten hit, ‘What Do You Want,’ his rendition of Johnny Cash’s popular hit song, ‘Ring of Fire’ (which ended up becoming a whole venue sing along), and ‘Why Am I So Thirsty,’ from his album ‘Judge Jerrod & The Hung Jury.’ He also performed two new songs from his current album ‘High Noon,’ including ‘Buzz Back Girl,’ but the highlight of Niemann’s set was the performance of the single on the album titled, ‘Donkey.’ As the band was starting to play the opening notes to the song, entering from stage left was a banjo playing donkey. The entire audience erupted into laughter upon the sight.

Niemann ended his memorable set with his current chart topper “I Can Drink To That.’

Fifteen minutes flew by as road crew set up the stage for the leader of the tour, Keith Urban- a 5-time CMA Award winner, a 5-time ACM Award winner, and an AMA Award in 2009, as well as and 2008 Grammy winner for Best Male Country Vocal Performance for ‘Stupid Boy.’   He has also taken home a People’s Choice Award and a Teen Choice Award in 2010 for Favorite Male Artist and Favorite Male Country Artist, respectively.

As the lights dimmed and the audience screamed, the fifteen time number one hit song artist entered the stage opening with ‘Love’s Poster Child.’ from his current album ‘Fuse.’ The crowd already on their feet next heard ‘Sweet Thing,’ during which Urban proclaimed, “Oh we are going to have a good show tonight“ and he did not disappoint. In his 21+ song setlist, Urban entertained us with songs from all of his albums. Including  ‘Long Hot Summer,’ from his album ‘Get Closer,’ and ‘Kiss a Girl’ from his album, ‘Defying Gravity,’ where Urban sat on the edge of the stage with a little girl, and kissed her on the cheek during the song.

One of the highlights of the show was the duet sung by Urban and WKLB Country 102.5 contestant, Whitney Doucet of Fitchburg, MA. Contestants were asked to record themselves singing the Keith Urban and Miranda Lambert song, ‘We Were Us.’ Doucet joined Urban on stage for the song and while listening to her amazing voice, it was no wonder why her entry was chosen as the winner.

Urban’s energy did not wane as he treated us to songs from his album ‘Get Closer,’ which included, ‘Put You in a Song and ‘Long Hot Summer.’ Urbans’ extraordinary guitar playing talent was very apparent when he is performing ‘Stupid Boy.’

Jerrod Niemann and Brett Eldredge joined Urban on stage to sing a rendition of Tim McGraw’s ‘Something Like That.’

Urban, known for his ‘Stage B’ performances did not disappoint on this night in Mansfield. He traveled up the aisles from the main stage to a stage set up at the edge of the lawn seats. He climbed on up and proceeded to indulge the lawn goers to three songs, ‘Days Go By,’ ‘Without You,’ and ‘You Look Good In My Shirt.’

Urban sang several songs from his latest album, ‘Fuse,’ including his current hit ‘Cop Car,’ as  well as ‘Even the Stars’ and ‘Little Bit of Everything.’

After a brief break, Urban returned to the stage for an encore which included the songs ‘Making Memories of Us’ and ‘Better Life’ as well as his anticipated new single ‘Raise ‘Em up’ with Eric Church.

After playing and singing 2+ hours of hit songs, Urbans’ last song, (or so we thought) was ‘Somebody Like You,’ but we were in for another treat when Urban began singing the Bee Gees song ‘Going Back to Massachusetts.’

As the concert ended, Urban said, “You sang your asses off and you always make us feel welcome. You can see at any concert. Thank you for choosing to see us. Boston Strong!”

Massachusetts loves you Keith Urban and you know we will continue to go to your shows as long as you keep coming back. 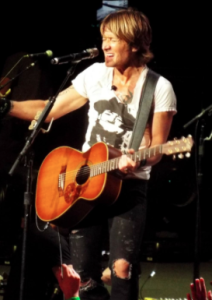 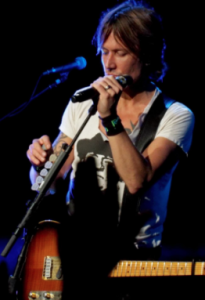