The album release party will be held on Thursday May 7th, 2015 at the hottest Country music venue, Loretta’s Last Call at 1 Lansdowne St. Boston, Ma. The special event will be free to the public and will feature the Houston Bernard Band performing their new album in its entirety, as well as local acoustic artists and a DJ to keep the music going while the band hangs out with fans.

Lead singer Houston Bernard (who has become known as “The Bad Boy of Boston Country”) states: “It is a very exciting time for Country music in New England and we can’t wait to share our new album with the extremely supportive Boston country fans. We’ve been working so hard on this release …it’s full of party songs as well as songs that contain deep meaning for us as a band. We have been blown away by the response that we’ve gotten from crowds after playing the new material, and we hope to see that love grow with the release of ‘Knockin’ Boots.’

The band was formed in 2013 when Bernard, a well-established solo performer, crossed paths with an all-star cast of supporting musicians. “It just clicked,” says Bernard “I am very blessed to share the stage with these amazing musicians and people. We each come from diverse musical backgrounds and when we play it just fires up on all cylinders. The new album is all about capturing the sound and creativity of us as a band.” 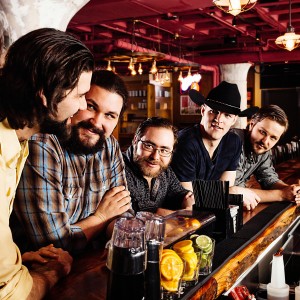 The group quickly gained a following in the Boston area of “not so typical” Country Music fans, earning them a nomination by the 2015 New England Music Awards for Country Act of the Year. The band played over 100 shows in 2014, opening for Jake Owen, Eli Young Band, Josh Thompson, Cadillac 3, Delbert McClinton, Scotty McCreery, 38 Special and Pure Prairie League.

Requests for their appearances have now begun to spread along the East Coast, prompting the planning of a Summer and Fall tour to support the upcoming release. The band is either headlining or appearing in many country music festivals in New England this summer as well as performing regularly at Loretta’s Last Call, the only venue in Boston that offers county music 7 days a week.