The Eli Young Band took their 10,000 Towns tour to a packed Pitt Center on Sacred Heart University’s campus in Fairfield, CT on Friday, October 3rd. There were crazy long lines already formed when I showed up about an hour before the show.

The show featured opener Anna Rose who has a very strong and unique voice and she performed a really cool all-acoustic set. Anna is one of those artists who is hard to put into a specific genre. She spent the summer touring with singer-songwriters Tyler Hilton and Tony Lucca. The all-acoustic set also featured some really cool acoustic percussion.

After a break that felt like forever, due to the excitement of the crowd, the Eli Young Band came out and opened with ‘Revelations.’ Lead singer Mike Eli was wearing a Sacred Heart Pioneers shirt which the crowd loved. He sang parts of the opening song through a megaphone which was really cool. The move energized the already amped up crowd even more. 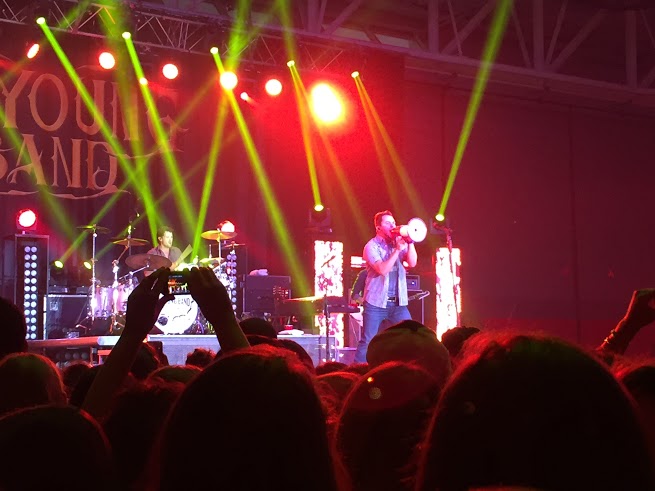 Eli then sang the up to the first chorus of ’10,000 Towns’ a Capella, which not only showed of his vocal abilities but fit the song really well.

As you can see in video (and all the other ones below), the crowd was with the band the entire night: hands up, dancing and singing along. After the show the band actually shared the below picture and tweet. 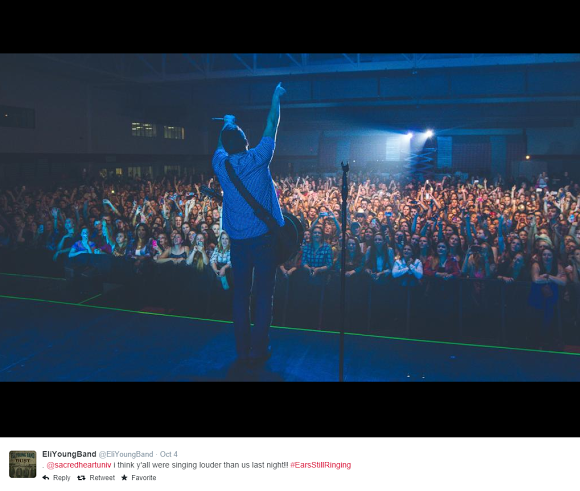 The band contented their set by playing ‘Skeletons’ off the ‘Life at Best’ album. After this the crowd began to roar as some familiar chords were played as Mike Eli talked about how nights like Friday always take you back and make you feel like you should be around a bon fire with some coolers of beer and a bottle of Jagermeister; you bust out some guitars and play some honkey tonk songs, but you always end up coming back to the love songs, as he said that the band picked up and went into, obviously, ‘Always the Love Songs.’

Next was ‘Dust’, a song that I really think never got the love that it deserved when it was released to radio earlier this year. Almost the entire crowd was singing along which leads me to believe I’m not the only one who feels that way.

After this the band thanked the Troops saying “we have the greatest job in the world… we get to follow our dreams because of you.” The crowd then went into a “USA” chant, something I think there can never be enough of. The band dedicated ‘Prayer for the Road’ to the Troops. I had never looked at the song through that lens, but it definitely fits. After this slower song the band emerged from the back of the stage with shots in their hands. 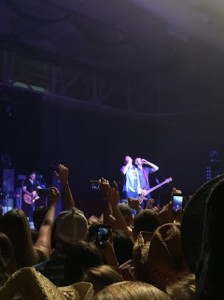 After proposing a toast to the crowd and to the headaches they will likely have in the morning, they took their shots and rocked ‘Drunk Last Night.’ As you can see probably best in this video, the guitarists and bassist wore pink straps in honor to Breast Cancer Awareness month, which I thought was a classy gesture.

The set really built as it went. They played their 2012 hit, ‘Even if it Breaks Your Heart,’ next which was a full on sing-a-long at points. One of the highlights of the show for me was during this song they transitioned into Tom Petty and the Heartbreakers’ ‘Learning to Fly’ before bringing it back to finish the song.

Up next was their first charted single ‘When it Rains.’ Throughout their set they referenced just being a garage band from Texas. They played the bar scene down there for many years opening for acts such as Miranda Lambert and Texas legend, Pat Green. I actually first heard about the band when I saw a neon sign for them at a bar at Texas A&M when I was down there for a conference. It’s crazy that six years later, I got to see them play for a packed house at a college in New England. Mike Eli and guitarist James Young were roommates their freshman year at the University of North Texas, before adding two other students to form the band as it is today. I know a lot of people who couldn’t even stand their freshman roommates, so I’m gonna say the country music world got lucky that two such talented artists ended up together.

Next the band played another one of their earlier songs ‘Small Town Kid.’ Eli explained the song has a theme and its one that a lot of us in New England can relate to: your hometown changing as box stores move in. My friends and I talk about it all the time and it is yet another example of country music being universal and not just southern.

The band wrapped up their set with their double platinum song ‘Crazy Girl.’ This was yet another sing-a-long. While the majority of the crowd were students, they were engaged with the show the whole time and totally respectful and in control. (Shoutout to Sacred Heart for hosting such an awesome show! I’ll gladly come back anytime.)

After briefly going off stage the band came back on and played a cover of Lynyrd Skynyrd’s ‘Give me Three Steps’ that had groups of people line dancing along the edge of the crowd.

The band doesn’t have any scheduled shows in New England at the moment, but if you want to take a road trip, it was just announced they will be at the 2015 Stagecoach Festival which should be on any country fan’s bucket list.