Typically when you think of DJs, country music isn’t the first thing that comes to mind. However, Dee Jay Silver’s growing popularity might change that presumption for many. He has played at countless festivals around the country, in addition to having a syndicated radio show, The Country Club with Dee Jay Silver, airing on more than 60 markets nationwide. As the country music genre has begun to attract a younger, livelier crowd, Dee Jay Silver has not only been along for the ride, he’s been there to give it a little extra push.

Silver started out DJing in college for some extra cash. His reason for playing country music was simple- most DJs play what they know and, “I know country,” he said. Soon enough, he realized that a typical nine-to-five job just wasn’t for him and pursued DJing full time. Making it as a country music DJ wasn’t exactly a piece of cake; Silver recounted how about five or six years ago, people told him it would never work – this crazy idea that a DJ could spin country music. “Being a Country DJ, if you stopped every time you heard the word no you wouldn’t be where I am,” he said. Touring with artists like Jason Aldean and Brad Paisley, being the first DJ to play the American Country Music Awards, performing at CMA Fest, the MTV Music Awards, and countless festivals, parties, and venues around the world, wouldn’t have been possible if Silver had walked away when doors were slammed in his face. He shared a story that validates this. “Probably less than two weeks before Jason asked me to go out on tour with him, I got turned down by another guy, and I was like, ‘Really?!’ Jason and I, we just kind of chuckle about it now,” he said.

Touring with Aldean has given Dee Jay Silver the opportunity to show folks that country music is fun for all ages, young people especially. The genre once had a reputation for heartbreak and lonely songs, but Silver credits artists like Florida Georgia Line, Jason Aldean, Sam Hunt, and Luke Bryan for showing people that country music can be a good time. The DJ is a big supporter of the direction that country music is headed. “I think it’s such a good move, it just makes country so much younger, so much more fun. It broadens the fan base and it makes the life of country music continue longer and longer. I remember going to country music concerts with my dad, it was just all old people sitting in chairs,” he said, explaining how it’s far from what you see at country concerts today. “It gets rowdy! You’ll get calls like, ‘Hey, you gotta calm down a little bit!’” Not only is country music expanding its age demographic, it’s also growing to many new markets, like New York City for example. Silver remembers playing Madison Square Garden with Jason Aldean in 2013, a show that he says sold out in less than 10 minutes. It was something extraordinary for a city that hadn’t had a country radio presence in about 17 years. Fast forward to summer 2015 where Dee Jay Silver got to perform between sets at NYC’s first ever country music festival. While Silver is no stranger to music festivals, he says it’s crazy to see big cities like New York and Las Vegas full-on country, adding, “Country is not king in New York City, but you sure could’ve fooled me that day.” He’s got a very important job at festivals like the aforementioned FarmBorough country music festival in NYC; Silver is responsible for keeping the energy up and making sure the crowd is having a good time between sets. “There isn’t one ‘right way’ to do it,” he explained. At each show he has to feel the crowd out and see what gets them pumped up. His only rule is to avoid playing songs by the upcoming headliners. 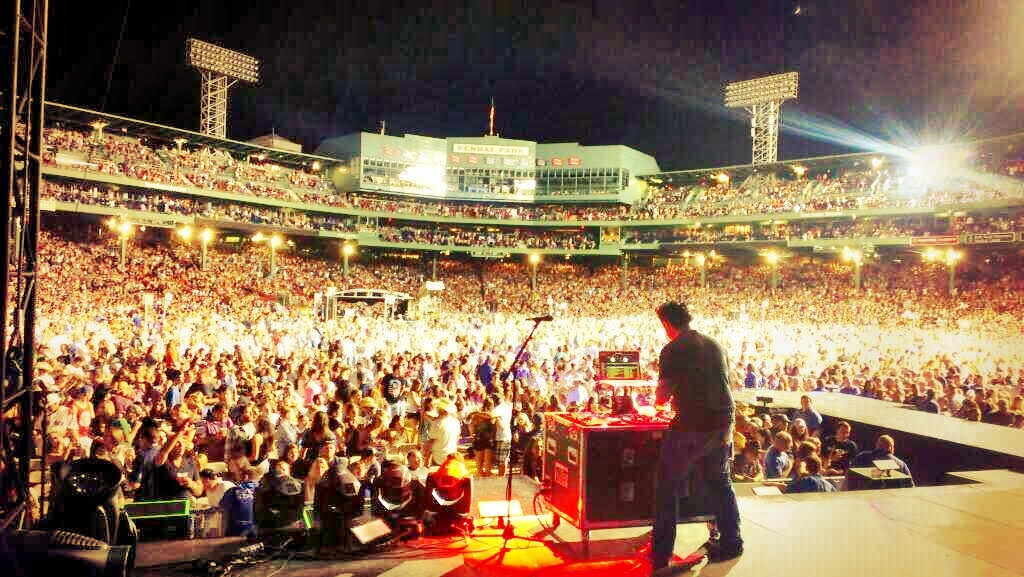 For the most part, the feedback Dee Jay Silver receives while playing is overwhelmingly positive, but he still comes across the occasional naysayer. “In their minds, If you don’t have an acoustic guitar you’re not a musician,” he said, adding, “It is what it is. We’re all musicians. We all do what we do for a living.” He mentioned that with photographers in particular, some are completely fascinated by him and others think he is a complete waste of time. He shared a story from a show he did in Michigan while on tour with Brad Paisley. “I walked off stage and the photographer said, ‘Hey DJ, I just wanted to tell you I had goosebumps while you were playing.’ I thought that was just the coolest thing to hear from a photographer. He got it, because I gave my heart and soul on stage. I could feel the energy of the crowd coming back.” It’s moments like this that completely silence the cynics. Just because Silver isn’t singing or strumming a guitar, doesn’t mean he isn’t just as passionate about his music as other artists.

Recently, Dee Jay Silver has been putting his heart and soul into a new record. Silver is the first DJ to be signed to a major Nashville label, and is just awaiting the green light from Sony to drop the album. It has been a couple years since the release of his EP, ‘Country Club,’ which features remixes of ‘Two Black Cadillacs/Jolene,’ ‘Dixieland Delight,’ ‘Angel Eyes,’ and ‘Barefoot Blue Jean Night.’ Fans can expect something along the same lines for his full album. Without giving up too much information, Silver says the new album will be “fun country music.”

While Silver is grateful for the opportunities he has been given, he’s hoping that the new record can lead to bigger things, as he still has some loftier goals. “Most of them [the festivals], I’m in between acts just trying to keep the crowd going like I did at FarmBorough. It works so well between sets. I definitely don’t see that stopping,” he said. “I cant wait to get the record out and come in as a slotted artist on these festivals, and that’s one of my main goals.”  Silver’s ambitions include going on tour and having a place in the lineup as opposed to playing in between sets. “Like with Jason, with me being the opening act or the middle slot,” he explained. Silver also mentioned how he would love to one day be able to perform his own set at a major music festival like Coachella or Stagecoach.

Although Silver has been touring for over 10 years, the DJ has no intentions of slowing down anytime soon. He’s got a packed schedule throughout the fall, teaming up with Jason Aldean again for the second leg of the Burnin’ It Down tour through October and making a few stops with Kip Moore and Michael Ray on Kip’s Wild Ones tour in November. Additionally, he signed on to play at the University of Kentucky’s home football games and NFR in Las Vegas, which will bring him through the first couple weeks of December. Even though he plays around 300 shows a year, Dee Jay Silver still gets just as excited about each one, mentioning that he was looking forward to his next show tomorrow. It’s obvious that he genuinely loves what he does and he doesn’t take that for granted. It is pretty safe to say that Dee Jay Silver has found his niche. As someone who has made a living by showing people a good time, it comes as no surprise to hear him dish out this bit of advice. “Life is too much fun to sit back and be so serious all the time.” So you can bet that if Dee Jay Silver is in the house, it’s guaranteed to be a party.