On Monday, December 5th Connecticut country fans showed up to pack the Cadillac Ranch in Southington for Country 92.5’s annual Unwrapped and Unplugged holiday concert. Doors opened at 6:00 pm and there was already a line of anxious, and chilly, fans outside that spanned the length of the building as seating for this event was first come, first serve. Fans entered the rustic-looking venue where holiday lights were strung and drinks were flowing. Coats were left on chairs as placeholders while fans crowded the bar as if it were a Saturday night. Fast forward one hour and it was just about time to start the show following a quick introduction and thank you from some of the 92.5 DJs.

Kicking things off was country newcomer, Ryan Follese. “Put your hands up!” he exclaimed as he introduced himself and jumped right into his own, ‘Wilder.’ It was clear from the start that the singer was ready to party as he encouraged the crowd to do as the song says and “get wilder.” He moved on to another song from his recently released, self-titled EP, ‘Float Your Boat,’ a fun and carefree song that had fans singing and clapping along. Upon it’s conclusion Ryan took a couple minutes to tell the audience more about himself. “Can I tell you a little story?” the singer asked, and only one person opposed, jokingly. “Everyone else wanna hear a story?” Ryan laughed. “I’m from Nashville, Tennessee and I grew up in a unique way, my mom and dad are both songwriters. Dinner time was very different for me, my mom and dad would tell stories of songwriting. My first job, aside from a hibachi grille I got fired at, I worked at a publishing company. One day my dad comes down to the basement, that’s where they kept me, he brought me up to his office to share a song … he thought it was the best song ever.” Follese continued to explain that when you’re a songwriter, you think that every song you write is the best song ever. But the song from his story actually turned out to be a pretty big hit. He went on to cover some of his parents’ well-known songs including Tim McGraw’s ‘Something Like That’ and ‘The Way You Love Me’ by Faith Hill. 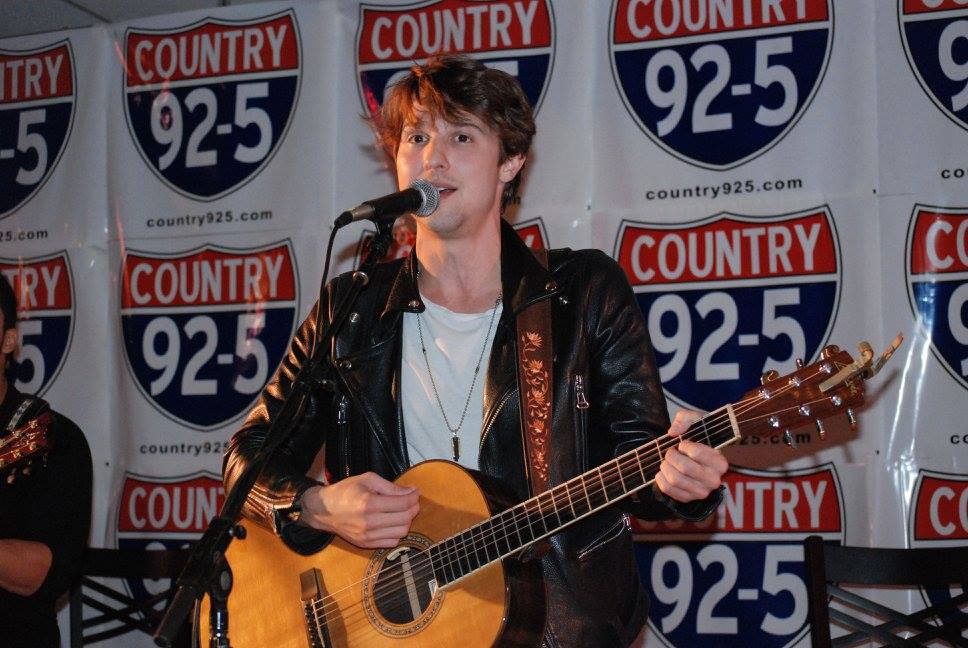 After paying respect to his parents, Ryan told the crowd about his rebellious phase when he was 14 and decided to start a rock band. Unbeknownst to many, Follese was actually the front man of the pop-rock band, Hot Chelle Rae. “This song was a big part of my life and led me to where I am,” he said introducing the band’s double-Platinum, ‘Tonight Tonight.’ The energy in the room soared as many fans stood up and sang along to the 2011 hit. “People don’t come out like this for shows on Mondays so thank you so much!” he said at the song’s conclusion. Ryan had time for one more, which of course had to be his debut single, ‘Put a Label On It.’ “My first single is about a phase of a relationship. It’s like, ‘Are we Facebook official or what are we?’ I just released a video last week. If you know it, sing along with me. If not, I Hope you like it!” the singer said. Most fans were in the former category singing out the song while everyone clapped along to the beat. Follese’s performance exceeded expectations and set the tone for a high-energy night.

After a short break to replenish drinks, everyone was back in their seats by 7:40, making sure they didn’t miss a minute of Chris Lane’s set. “I know it’s Monday, but is anybody all about the weekend like I am?” Lane asked enthusiastically as he took the stage and set off an explosion of applause from the crowd. “That’s what this song is about,” he said introducing his first song of the night, ‘Saturday Night.’ He took a brief moment after the song for some casual conversation with the crowd, “So what’s up?” he asked. “How are y’all feelin’?” At this moment, Lane noticed that a few fans were out for a special celebration. He wished them all a happy birthday before moving on to ‘Her Own Kind of Beautiful’ and one of his favorite songs from his debut album, a cover of Mario’s ‘Let Me Love You.’ As if the intimate venue wasn’t enough, Chris decided to get closer to the audience for his next set of songs by moving his seat down to the floor. “I never get a chance to be this close to y’all,” he said before explaining how he started out in a small cover band. “I’m going to play my favorites, all I ask is if you know any of these you help me out.” His covers included our second Tim McGraw song of the night, ‘Just to See You Smile,’ and one from the guys he spent the summer touring with, Rascal Flatts’ ‘These Days.’ Of course, everyone knew all the words and we had ourselves a sing-along as fans snapped pictures and videos with a closer perspective of the singer. 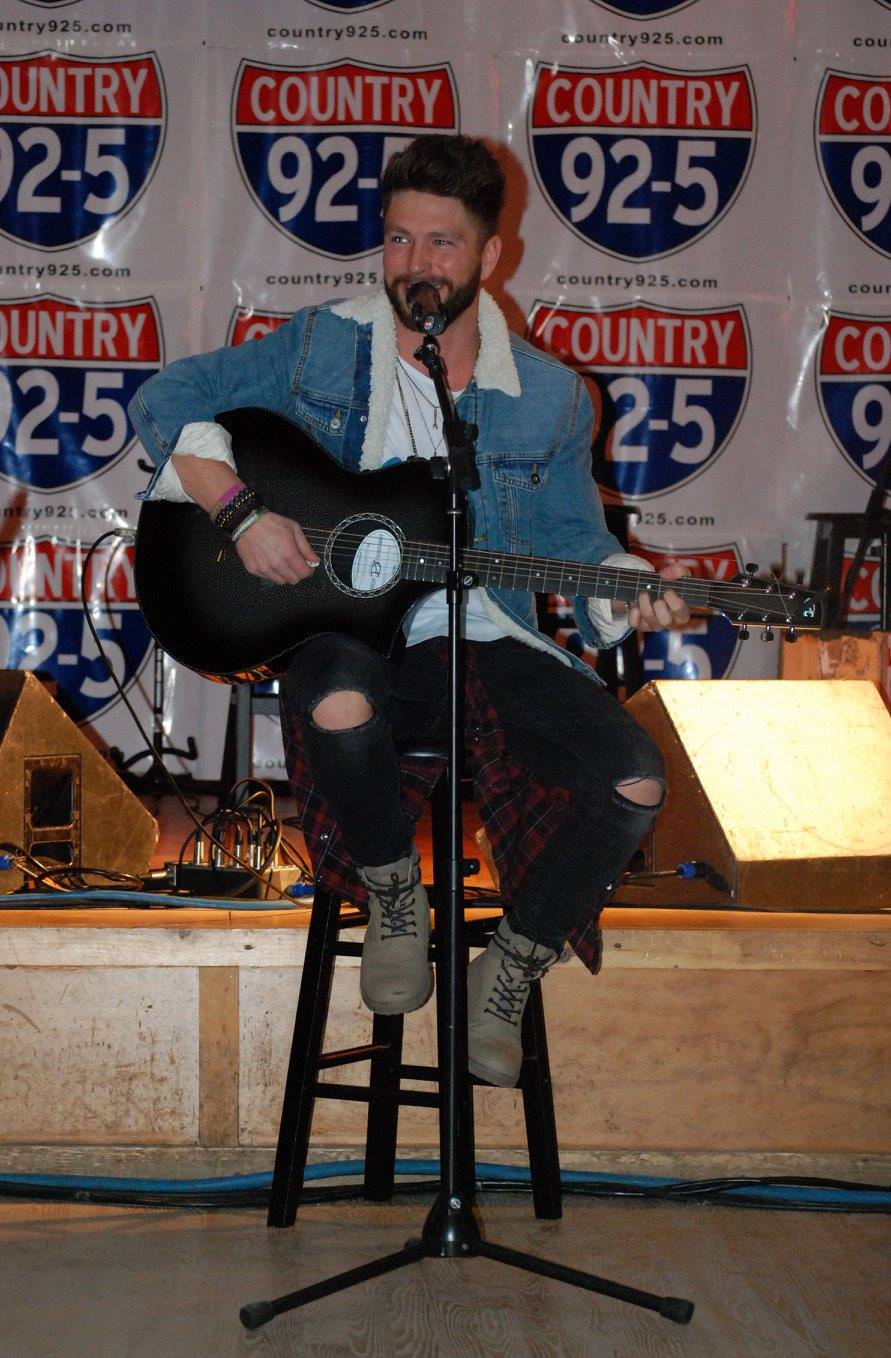 Transitioning back into his own music, Chris asked the crowd, “Do we have any couples? Do we have anybody who came together?” Receiving a pretty solid response of applause and some raised hands, Lane continued, “If you came with someone tonight, I want you to look them in the face and say, baby, this next song Chris is going to sing, I want to dedicate to you.” He paused for a moment looking around the room. “Do we have any single ladies in the house? I want to see you after the show!,” Chris teased and all the girls screamed with excitement. But one special girl got to join the singer on stage as he serenaded her with his latest single, ‘For Her.’ After the song ended Lane quickly kicked the energy back up with a run of fun cover songs he’s known for playing. “Tell me you’re ready to turn up,” Chris shouted as he jumped into the Backstreet Boys, ‘I Want It That Way.’ This run also included bits of NSYNC’s hit, ‘Bye Bye Bye’ in addition to ‘I Can’t Feel My Face,’ ‘Sexy Back,’ and ‘Want To Want Me’ by The Weeknd, Justin Timberlake, and Jason Derulo, respectively. Lane had just about everyone on their feet dancing, because who can resist a classic boy band hit? While everyone was moving their feet, some fans eventually moved all the way up to the stage where Lane graciously posed for selfies. “Thanks so much for having fun with that! You can stay standing for this last song,” Chris exclaimed. “Shoutout for all the love, shoutout to 92.5, thanks to y’all and thanks to them I got to celebrate my first Number One!” Lane ended his set with his chart-topper, ‘Fix,’ as fans packed in the space in front of the stage and sang along louder than they had all night. Chris even stuck around for a few minutes after his set had ended to take more pictures with enthusiastic fans. 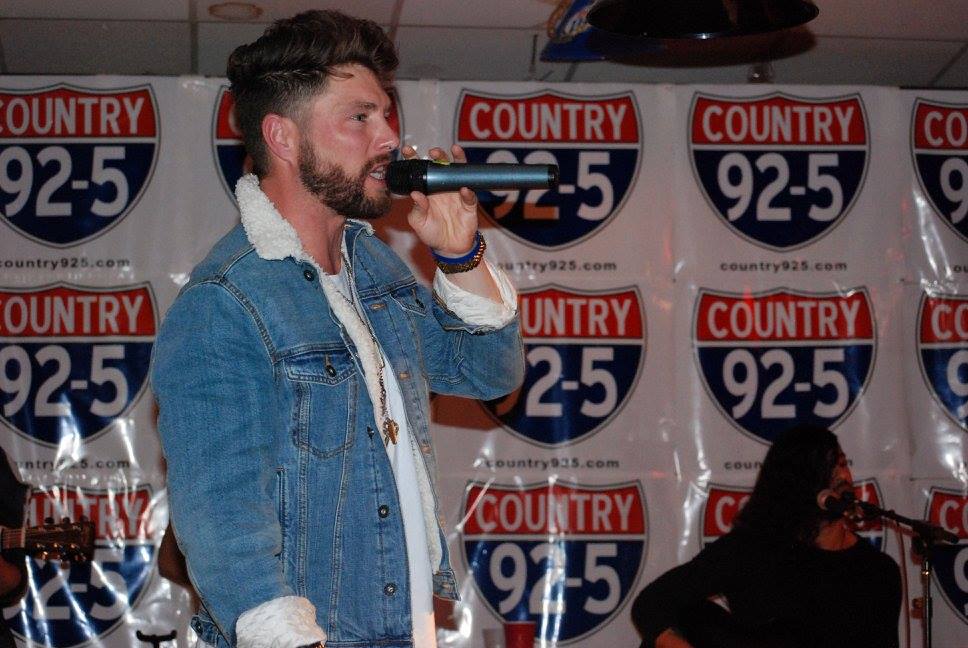 Although Lane had left the stage, the fans in the front didn’t move an inch. They kept the floor packed anxiously awaiting the night’s headliner, Jerrod Niemann. Around 8:30 the singer came out to an eruption of cheers and started his set with ‘One More Drinkin’ Song.’ The hyped up crowd raised their drinks and sang every word along with Niemann. “You gave us our first number one hit so I’m going to dedicate this to you,” Jerrod said before moving on to his 2010 chart-topper, ‘Lover Lover.’ After the song ended, with a fresh drink in hand, Niemann proposed a toast, “Here’s to Country 92.5,” he said raising the drink. “I love you more moving anything, so here’s to you!” Fans toasted with the singer as he moved on to play ‘I Ain’t All There’ and ‘Shining on Me.’ “Is there anybody here that we haven’t had the opportunity to play music for?” Jerrod asked, and invited another young lady to join him on stage. Much younger, in fact, as she couldn’t have been more than 10 years old. “Who thinks she’s more than cute?” he asked about the adorable little girl. “Would you say Ashley is beautiful?” He continued. Fans cheered and hearts melted while he sang the classic Joe Cocker song, ‘You Are So Beautiful’ and dedicated it to Ashley. 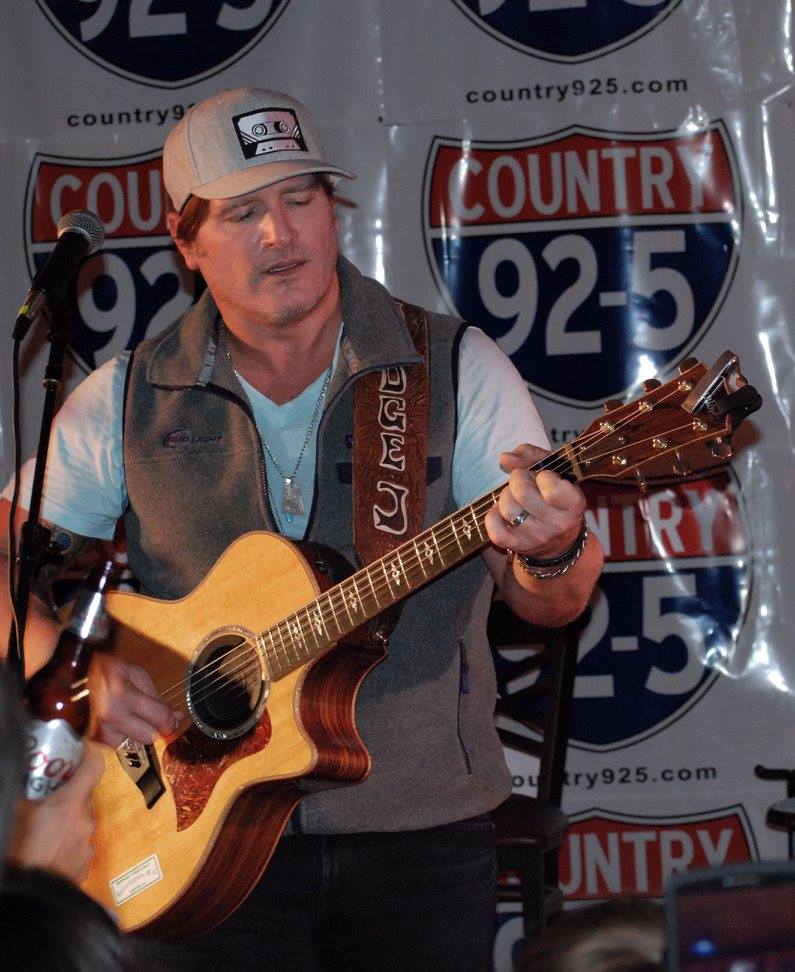 After Ashley had been returned to her parents, Niemann announced, “I’m attempting to hide the fact that I’m on antibiotics,’ he paused. “Let’s crank it up!” Niemann shouted, and began to play his fun, new single with Lee Brice, ‘A Little More Love.’ Jerrod followed up with his song about a hangover cure, ‘Buzz Back,’ and then slowed it down for, ‘What Do You Want.’ “Every time we come out here we have a tradition,” Niemann said at the song’s close. “We have a lot of Charlie Daniels fans,” the singer added. His statement was supported by an outburst of applause, so he challenged his bandmate to play ‘The Devil Went Down to Georgia.’ The challenge was accepted much to the delight of the crowd who sang along loudly and stomped to the beat while Niemann played the part of air guitar. “A one of a kind guitar player, and one of a kind crowd, on a one of a kind night. Let’s give it up for Tim!” Niemann shouted midway through the song and fans cheered even louder. “This is awesome you came out on a weeknight. We want to play you a drinking song,” Niemann said introducing his 2014 chart-topper, ‘Drink to That All Night.’ Fans sang along to every word and the party was definitely in full swing at this point. The singer kept the energy up with his rendition of Mel McDaniel’s ‘Louisiana Saturday Night’ before taking a request from someone in the crowd for Niemann’s ‘Donkey.’ “We can only do ‘Donkey’ if we have a good donkey sound,” the singer replied. “Don’t be shy, you know you’re an ass,” Jerrod joked prompting an outburst of laughter from the crowd as the fan made his way on to the stage. Niemann proceeded to play the hilarious song, pausing in the chorus to allow the fan to utter his best “hee-haw” sound, generating laughs and applause each time. While some find the song to be a little ridiculous, no one can deny that it makes for a good time, which was proven Monday night.

“I feel like we’re on a natural high… plus alcohol,” Niemann exclaimed. But unfortunately, it was clear that the night was coming close to an end. “Put your hands together for 92.5. Thank you so much for having us!” Jerrod said, completing his set with a high-energy cover of Alabama’s ‘Mountain Music.’ Never have we ever seen a sold out crowd on a Monday night with such vivacity. Fans were stomping, clapping, dancing and singing along until the very last note was played. Before his final thank you and goodbye, Niemann assured the crowd that he would be sticking around after the show. The singer even made a call to Country 92.5’s morning show the following day to chat with hosts, Broadway and Cory. He surprised everyone by calling the request line to talk about how much fun the show was, and they all agreed they were hurting a bit Tuesday morning. We’re pretty certain they weren’t alone. Aside from a sleepy day at work, school, or wherever, it’s safe to say that Monday-funday was well worth it! Country 92.5 never fails to host an incredible show, and Ryan Follese, Chris Lane, and Jerrod Niemann surpassed expectations for an unforgettable evening!