Lowell, Massachusetts may be best known for it’s long history of textile industries, but on Thursday, November 19th, it was a different type of scene as luxury tour buses pulled up to the Lowell Memorial Auditorium for a night of country music. The highly anticipated show was the only stop in the Bay State for Chase Rice’s JD and Jesus Tour, which also featured The Cadillac Three and the rising artist Jordan Davis. When doors open at 6:30PM, fans with floor tickets flooded inside the pillared entrance of the historic venue, which was built in 1922, to try to get as close to the stage as possible.

Right at 7:30, the lights went down and Jordan Davis took the stage with his band. With a beard that would make any New Englander proud, the Louisiana native, and former LSU Tiger, played a handful of songs, kicking it off with ‘Over You,’ ‘Tough to Tie Down, and ‘Goin Round.’ Describing the next song, Jordan would explain, was “about slow dancing in a Wal-Mart parking lot,” appropriately titled ‘Slow Dance In A Parking Lot.’ Jordan would wrap up his 30 minute set with ‘We Ain’t Gotta Talk About It’ and ‘Take It From Me’ before leaving the stage to meet fans at his merch table and take in the show from the floor. Most fans in attendance may not have known Jordan’s name when they arrived in Lowell, but they sure did after he left the stage. Jordan is definitely someone to watch in the genre, as he has a unique but powerful voice. 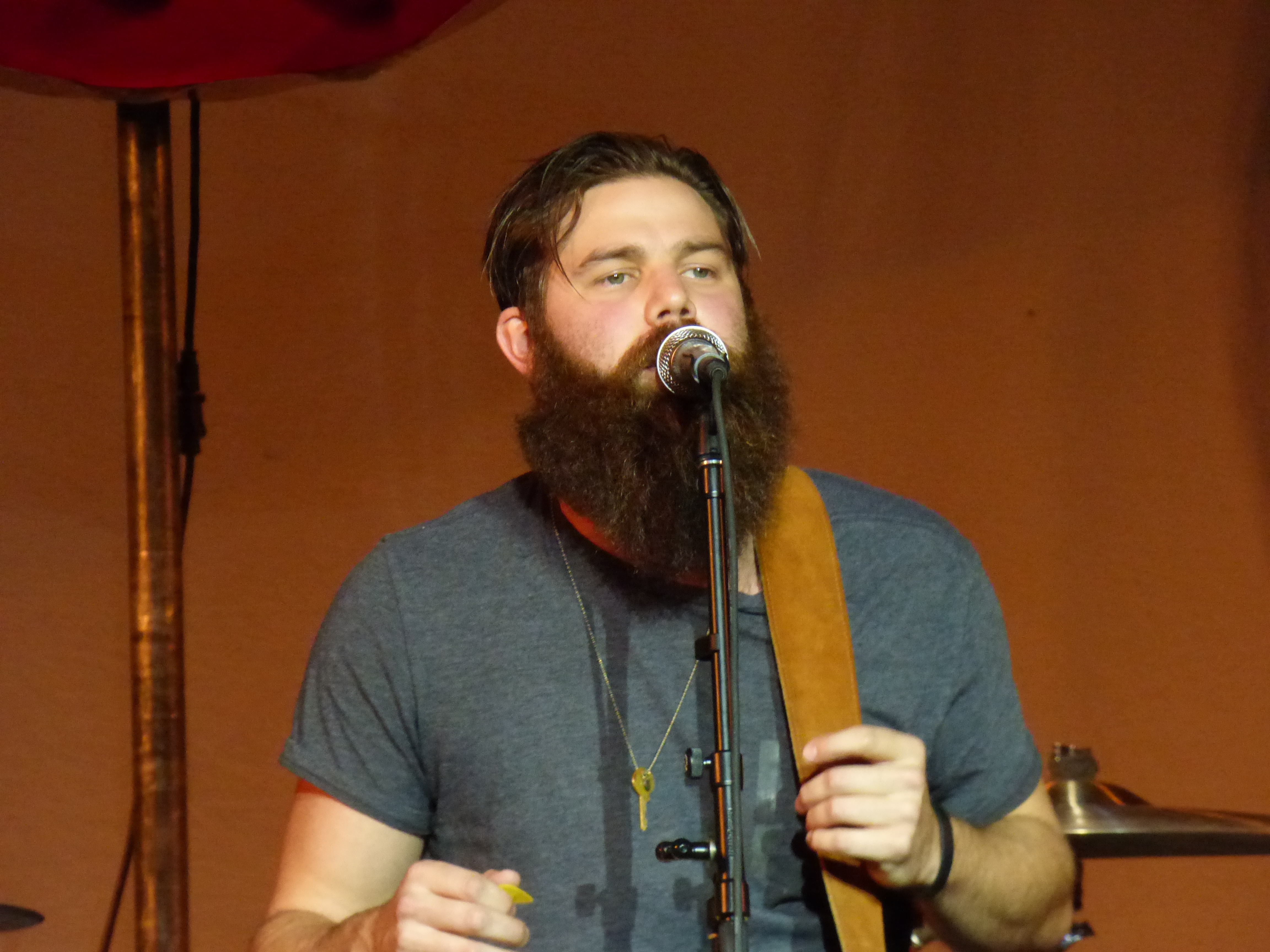 Next up on the bill was The Cadillac Three. The guys had a whirlwind couple of days leading up to this show, as their tour bus had broken down on the way to the show in Long Island and were forced to miss the show because of it. With built up energy, the trio put together an incredible set that started with ‘Days of Gold,’ a song that leadman, Jaren Johnston, and drummer, Neil Mason, wrote before Jake Owen recorded it. Their night continued with the hard-hitting ‘I’m Southern’ before they slowed it down with a special song that Johnston wrote for his wife. With his wife in attendance, he led up to the song by saying, “I wrote this song for my wife. She’s here tonight. I love you, baby.” The song, of course, was ‘White Lightning,’ and had couples in the audience swaying along to the song, while also singing the masterful lyrics. But knowing these guys, they wouldn’t keep the energy at that level for too long as Jaren told the crowd, “Y’all feel like partying tonight? I wanna party like you,” as they began to strum the first chords of their 2014 single, ‘Party Like You.’ 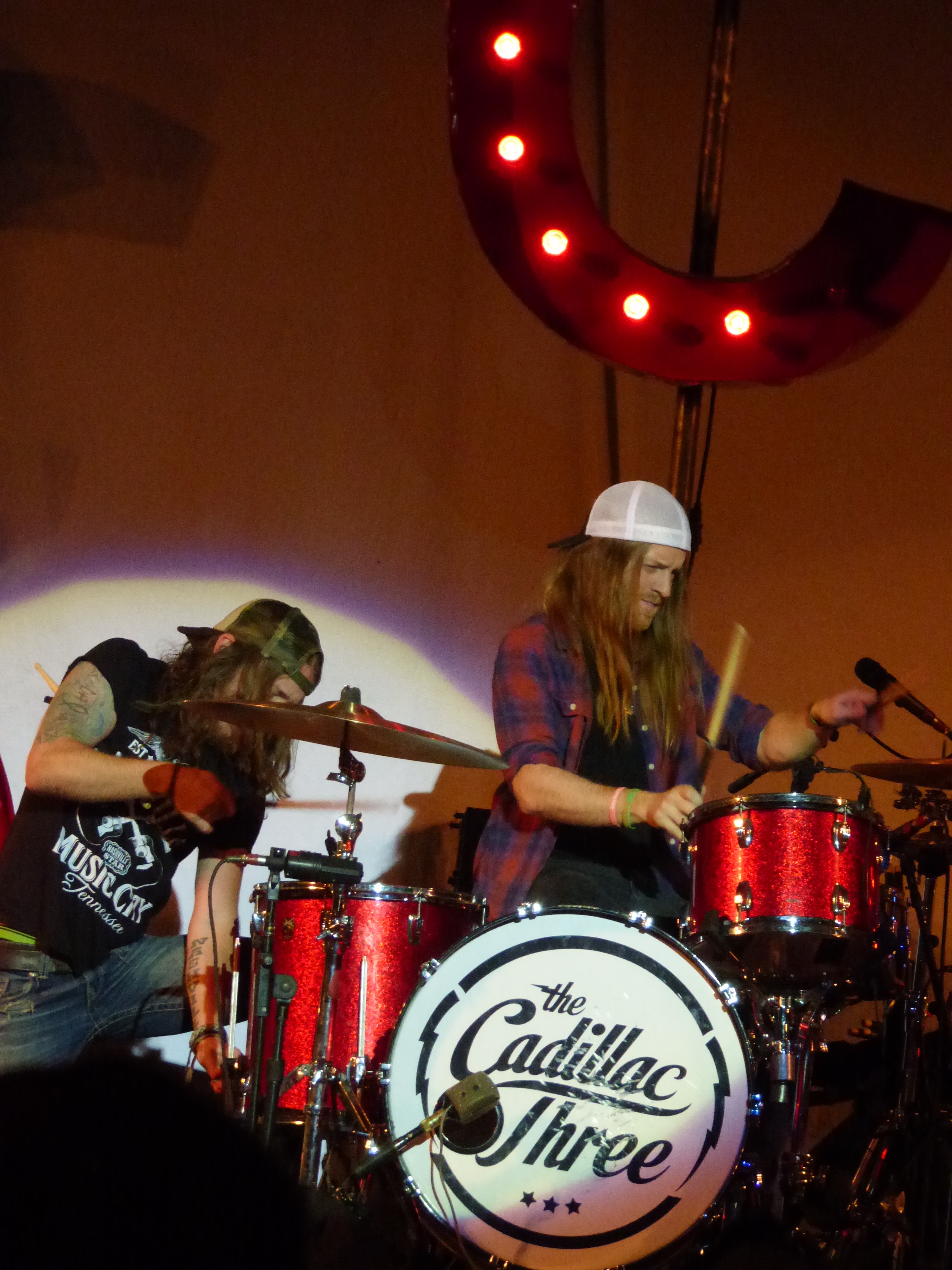 Whether you’re a Cadillac Three fan or not, chances are that you know some music that they have written for other artists, and fans were treated to one of our favorites, ‘Raise ‘Em Up,’ which was recorded by Keith Urban and Eric Church. After wrapping up their version of the recently crowned CMA Musical Event of the Year, TC3 got back into their music with ‘Get Your Buzz On.’ Johnston saying afterwards, “Boston is one of my favorite cities in America! You’re passionate… And you love good cold beer!” to the delight of the fans in attendance. With only a few minutes left in their set, the guys went into a song that they rarely play titled ‘Red Light’ and Jaren explained, “My wife doesn’t get to come to many shows. So I’m going to play another one for her if you don’t mind. And if you do mind, you can kiss my ass.” Jaren Johnston laying down the law, ladies and gentlemen. And despite a majority of the crowd not knowing the lyrics of the song, the band gave it their all, and as a fan you can’t ask for more. With only one song left, there was only one way to end it- with a tribute to their upbringing in Tennessee, ‘The South,’ and as they do in all of their shows, each musician stood up from their instruments to lead the crowd in the chorus, “This is where I was born and this is where I’ll die…” It was great to see TC3 perform a long set that enabled them to perform not only songs that were recorded by other artists, like ‘Raise ‘Em Up’ and ‘Days of Gold,’ but also their own music. And as they do with every show, they rocked the house and made hundreds of new fans while doing so.

Just one more intermission stood between the fans and headliner, Chase Rice. With a lengthy break between sets, fans found ways to entertain themselves, which often led to dancing. And one young fan stole the show! This young man, who may have been 10 years old, was at the front of the balcony showing off some sweet dance moves including when he would hold onto the railing and kick his feet up into the air. And the crowd was LOVING it with screams, claps, and many camera phones out recording his mini dance show. We even spotted some of Chase’s band and crew peaking out of the red theater curtain, trying to figure out why the crowd was getting so loud despite no one being on stage.

With emptied bladders and fresh beers in hand, fans were buzzing as the lights went down on the final intermission. A white curtain hung along the width of the stage, bright colored lights flashed from behind the curtain, and the silhouettes of band members started to take shape. Fans knew the silhouette of Chase Rice, based on the increasing intensity of screams, as he took the stage with his hand raised in the air. As the first chords of ‘How She Rolls’ began to blare out of the speakers, the curtain fell revealing the man of the hour- Chase Rice! The energy would stay high throughout the night as Chase would continue his set with ‘Do It Like This,’ ’50 Shades of Crazy,’ and ‘U Turn’ off of his 2014 ‘Ignite the Night’ album. In between, he would also mix in ‘I Like Drinking, Cuz It’s Fun,’ a song he co-wrote with Florida Georgia Line’s, Tyler Hubbard and Brian Kelley in 2012. 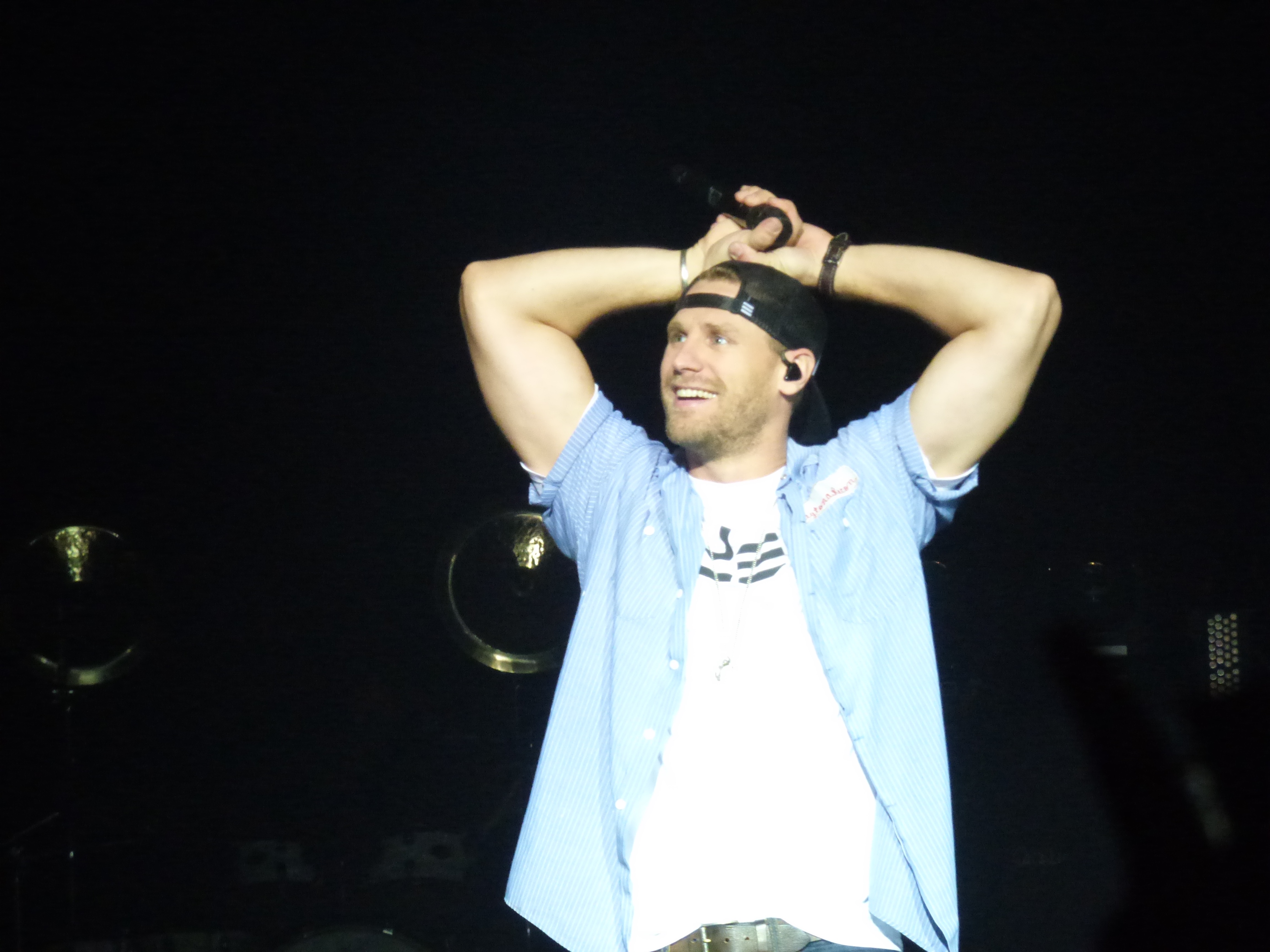 Chase definitely knew the landscape of Lowell going into the show He knew that it wasn’t just a blue-collar industry town, but also a college town with UMass Lowell, right down the street. He went on to say there were a lot of college kids in the crowd and he wanted to play some music that was on his college playlist. The songs he would go on to play were Eric Church’s ‘Smoke A Little Smoke,’ Def Leppard’s ‘Pour Some Sugar On Me,’ the always-classic ‘Dust On the Bottle,’ and Tom Petty’s ‘Free Fallin.’ While the Carolina native rocked these classic songs, fans wanted to hear some more of his music and he happily obliged with ‘Going Out,’ before telling the crowd, “I officially sold this place out tonight. I love y’all,” while also giving a shout out to the Patriots, which the fans obviously approved with a loud cheer. 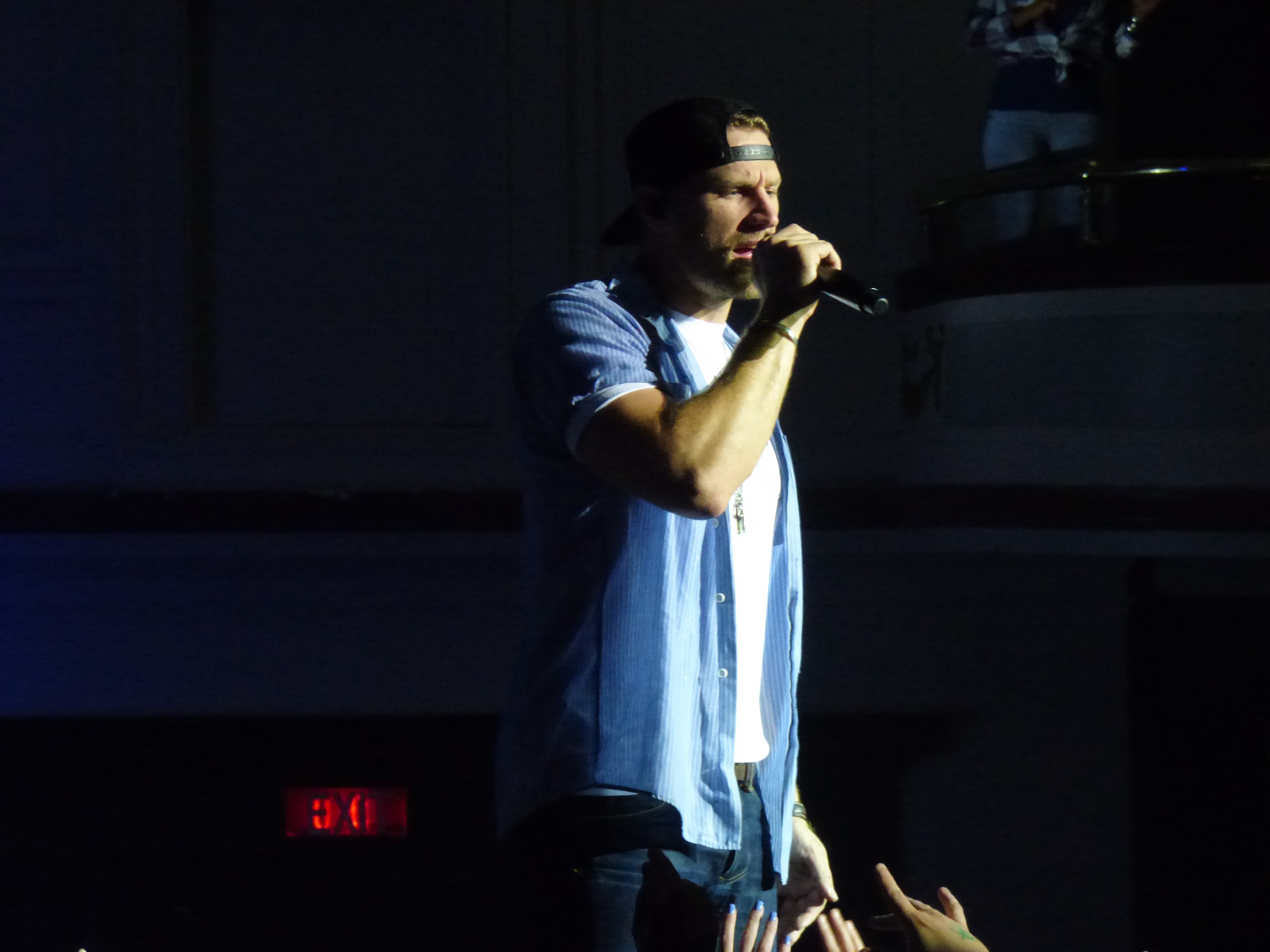 Though Chase frequently took a drink out of his Carolina stadium cup, he needed a break from the high energy that he had already been giving the crowd. So he brought down the lights for a stripped down version of ‘Carolina Can,’ a song for anyone from a small town, and ‘Jack Daniels and Jesus’ with his current single, ‘Gonna Wanna Tonight,’ in between. During ‘Gonna Wanna Tonight,’ Chase was able to stop singing and stop his band from playing as the crowd was singing along so loud that they didn’t even need him or the music! It was definitely a cool moment for Chase as he pulled out his cell phone to record it.

Next up was the always-sensual ‘Ride,’ and as soon as Chase began playing the first chords on his guitar and singing the first lyrics, the screams seemed to get louder- from the female fans in the crowd. As the song progressed, New England native, and a member of Chase’s crew, John Lessard appeared from the back of the stage with two stools and as soon as he did, the girls in the crowd immediately started throwing their hands in the air as they knew Chase was about to pick someone to sing the song to. Chase picked a young lady from the front, named Tanya, who was actually at the concert with her son and her husband. As the woman began to sit down on the stage, Chase asked her, “What’s your husband’s name?” And she answered by telling him his name was Tyler. “Forget about Tyler right now,” Chase responded, as the crowd erupted in laughter and screams of approval. In harmless fun, Chase would sing the song to her, and in doing so making every other girl in the crowd extremely jealous of Tanya. Sorry, Tyler. 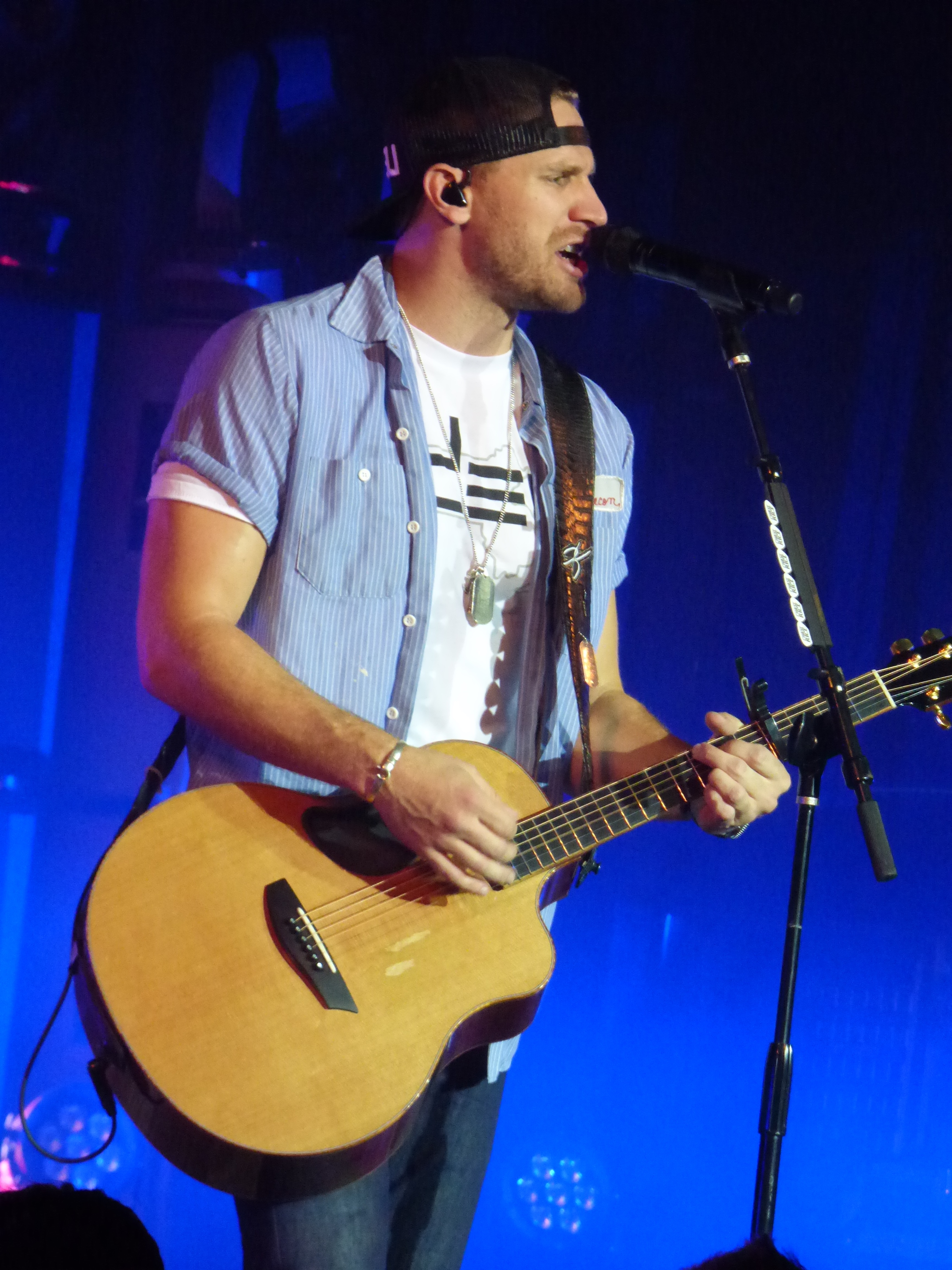 It was time to get the building rocking again, so what better way than to play one of the most successful songs in country music history!? The 9x Platinum-certified single, ‘Cruise,’ which Chase co-wrote for Florida Georgia Line. The crowd was singing along to every word, because let’s face it, EVERYONE knows the words to this song! Midway through the song, Chase acknowledged that he was on Kenny Chesney’s tour in select dates this summer, saying it was the best summer of his life, and that he wish he got to finish it out at Gillette Stadium. While introducing his band members, he gave each of them a chance to play a little bit of a song that they wanted to play which included Blink 182’s ‘All The Small Things,’ Puddle of Mudd’s ‘She Hates Me,’ and of course Garth Brook’s ‘Friends in Low Places.’ During the latter, Chase noticed a guy in the front row with a tour t-shirt from Garth’s current world tour, and since Garth was Chase’s first concert, what did Chase do? Bring the fan up on stage, naturally. Chase handed him the mic, letting him sing the infamous 3rd verse, saying afterwards, “That was the coolest shit I’ve ever seen on stage.” While the fan made his way back to his place in the crowd, Chase would return to ‘Cruise’ but the remix version, doing his best Nelly impersonation. “I love you guys so much. See y’all next time,” he exclaimed to the crowd as he headed backstage.

But these diehard fans would not allow him out that easily. The crowd got louder than it had been all night. And Chase rewarded them with one more song, the high-energy ‘Ready Set Roll’ before he retreated backstage for the final time that night.

In all, it was an awesome concert, packed with energy from the first chord of Jordan Davis to the last chord of ‘Ready Set Roll.’ It was a show not to be missed, and for 2,800 lucky fans, they left the Lowell Memorial Auditorium knowing that they got a show worth every penny that they paid.

For more photos from the show, head over to our album on Facebook.