On Thursday, October 2, 2014, Chase Rice began his Ignite the Night tour with this first show of the tour taking place at the House of Blues in Boston, MA. The North Carolina native brought up-and-coming band, Old Dominion, with him. And boy, did Old Dominion and Chase Rice bring the energy from the first song to Chase’s encore!

Arriving on Lansdowne Street before the show, it was very apparent from early on that the cold and drizzly weather wouldn’t have an affect on the crowd. The lines in front of the House of Blues began early and they kept getting bigger and bigger, even after doors opened at 7PM. And when those doors opened, a number of fans raced into the venue running through the music hall to get as close to the stage as possible. One female fan even threw her ticket at an employee checking to see if people had floor tickets and just kept going. Fans made it clear that they would do whatever they could to get as close to the stage as possible. 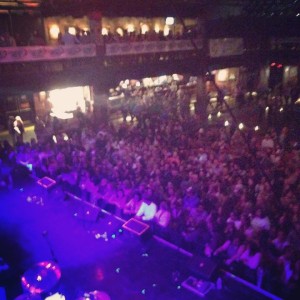 Right around 8:15, Old Dominion took the stage and got the soldout crowd jumping around and singing along. The five-member band played a number of their original songs from their EP but they also played some songs that they co-wrote and were recorded by other artists. During their set, they covered The Band Perry’s ‘Better Dig Two’ and ‘Chainsaw,’ as well as Dustin Lynch’s ‘All Night.’ But the group also impressed the crowd with some of their own songs with performances of ‘Shut Me Up’ and ‘Break Up With Him,’ which will be a hit song for the group and will only assist in helping them attain the musical goals. Unless you have access to Siriux XM The Highway, you may not have heard of Old Dominion before. But after this performance, thousands of New Englanders now know the group and have been made fans after one hell of a rocking performance by Old Dominion and it showed as they were swarmed at their merch table after their performance. 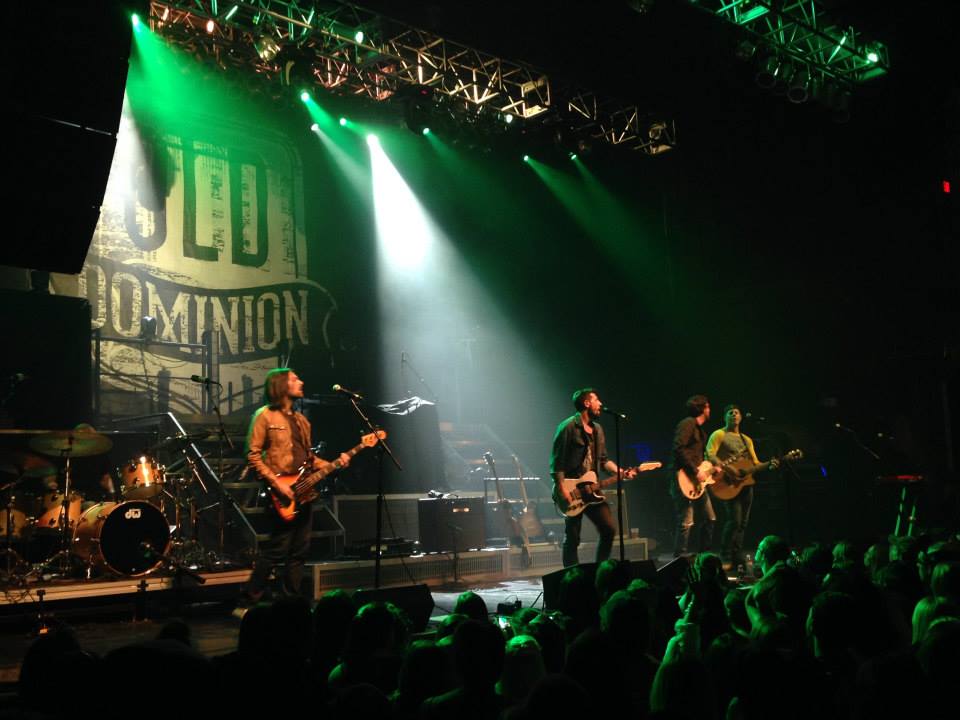 After a short break, the lights in the music hall went dark, before the stage lights came on in red and purple. As band members took the stage, the crowd got even louder and moments later Chase appeared at the top of the risen platform in a Green Monster t-shirt. He began his show with ‘Do It Like This,’ which is a rocking song off his recently released album. Over the course of the night, Chase would play ten of the fifteen tracks on that album including ’50 Shady of Crazy’ and ‘Beer With the Boys.’

Recently, country megastar Luke Bryan covered Chase’s ‘Ready, Set, Roll,’ so in Boston, Chase returned the favor and covered Luke’s ‘Drunk On You.’ Throughout the night he would cover other songs like Wiz Khalifa’s ‘No Sleep’ and R Kelly’s ‘Ignition’ and Nelly’s ‘Country Grammar.’ Chase kept the energy high throughout the night only slowing it down for a short bit to catch his breath and sing highly acclaimed song ‘Jack Daniels and Jesus’ which featured Chase sitting on a stool, the hall dark and just a few lights shining on him. He told the crowd that he wanted to bring it back to how it was when he wrote it, just him and a guitar. After finishing that song, a second stool was brought out and Chase brought up on stage, a young lady, named Allie, with a pink sash who was celebrating her birthday. After getting her up on stage, Chase asked her how old she was and was relieved when he found out she was legal-barely, after noticing the black X’s on her hand. With hundreds of jealous young ladies in the crowd watching in awe, Chase serenaded Allie with his slow and sensual song titled ‘Ride.’ 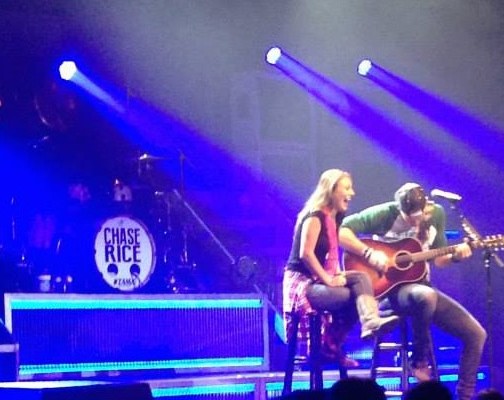 It wasn’t long before Chase again cranked up the energy with his own rendition of LIT’s ‘Own Worst Enemy’ and his song ‘Whoa.’ During ‘Whoa,’ Chase held a decibel battle between the left and right sides of the music hall with his guitarists, Derrick Royer and Brandon Austry, acting as captains, which also turned into a guitar battle between the two. Chase finished his set with ‘This Is How She Rolls’ and he thanked the crowd as he walked off stage.

But the crowd wanted more, after a Chase Rice chant, a recorded interview came over the loudspeakers with Chase talking about some of his favorite songs. As the lights came up, you could hear the music for his most successful song ever… a song he didn’t even record but one that he wrote: Florida Georgia Line’s ‘Cruise.’ The crowd went crazy as we performed one of the biggest tracks in country music history.

After doing his rendition of ‘Cruise,’ Chase wrapped his night at the House of Blues with his current hit, ‘Ready, Set, Roll,’ as he walked around the stage in a ‘Rice’ Red Sox jersey, signing autographs for fans. 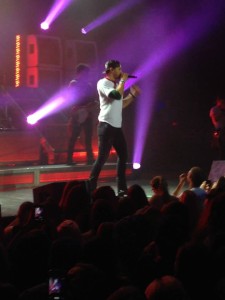 All in all, it was a phenomenal show form start to finish. Old Dominion came in, and were probably not known by everyone in house, but everyone knew their name by the end of the night. And Chase Rice brought enough energy and excitement to ignite the night and the House of Blues on that Thursday evening.

Oh, and Chase was seen in an awesome New England Country Music shirt after the show.

You can get the same shirt here. 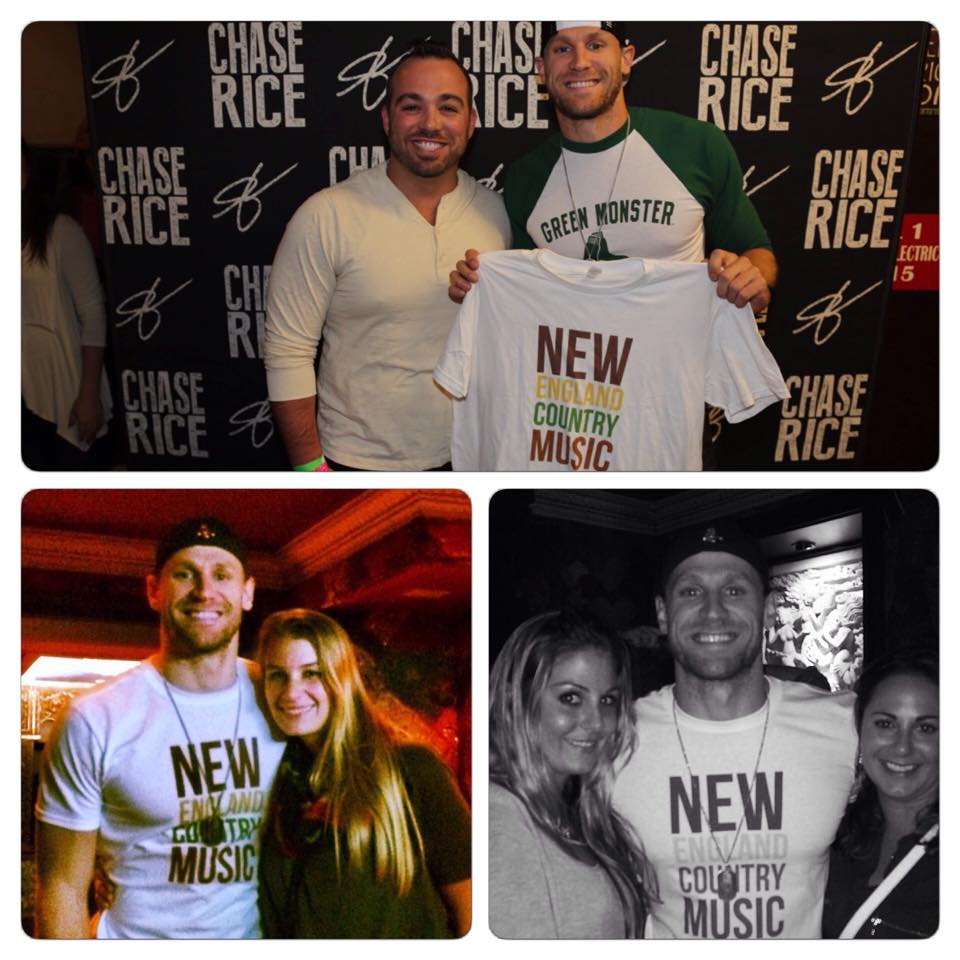