On Saturday night, Brad Paisley brought his ‘Country Nation World Tour’ to the Xfinity Center in Mansfield, MA. In addition to bringing some ‘Moonshine in the Trunk,’ he also brought Charlie Worsham, Leah Turner, and Randy Houser with him for a nearly sold-out crowd. In anticipation for his new album, which hit stores on Monday, thousands of fans flocked to the outdoor amphitheater 36 miles south of Boston to hear some of  Brad’s new tunes as well as some of his classic songs.

Up-and-coming star Charlie Worsham started the night with his song ‘Could It Be’ and played a few other songs including ‘Trouble Is,’ ‘Rubberband,’ and ‘Want Me Too.’ One thing that was definitely noticeable with Charlie’s performance is his natural stage presence. He was constantly interacting with fans as he would lean down and take pictures with fans. Charlie also took a fan’s Coors Light box cowboy hat and put it on, as well as give a fan his guitar pick and told her to play his guitar for him. Charlie also jumped and ran around the stage like a rockstar and at one point jumped off stage and ran up the aisle to the ‘B’ stage similar to how Brad Paisley does during his shows. One of my favorite moments of his performance was when he told fans to chant his name so that they would remember him down the line. And I can guarantee that is something that those fans won’t forget. After his performance, Charlie treated himself to some of the North End’s famous Mike’s Pastry on the bus and headed over to Toby Keith’s Bar and Grill in Foxboro for a post-concert party hosted by WKLB. 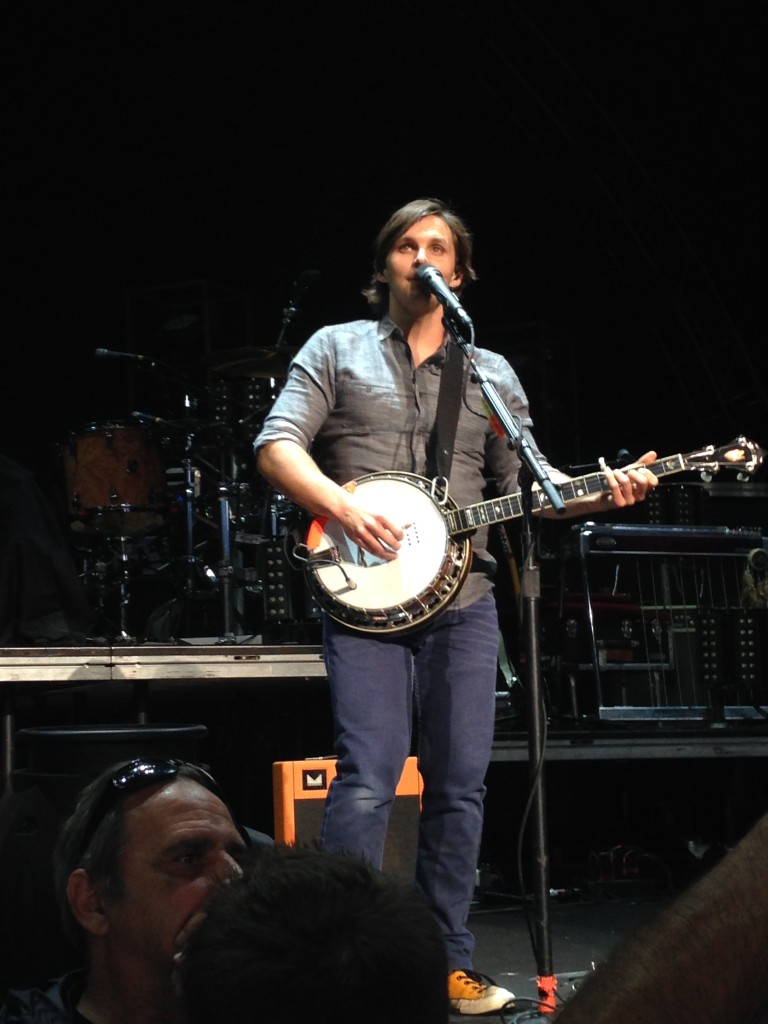 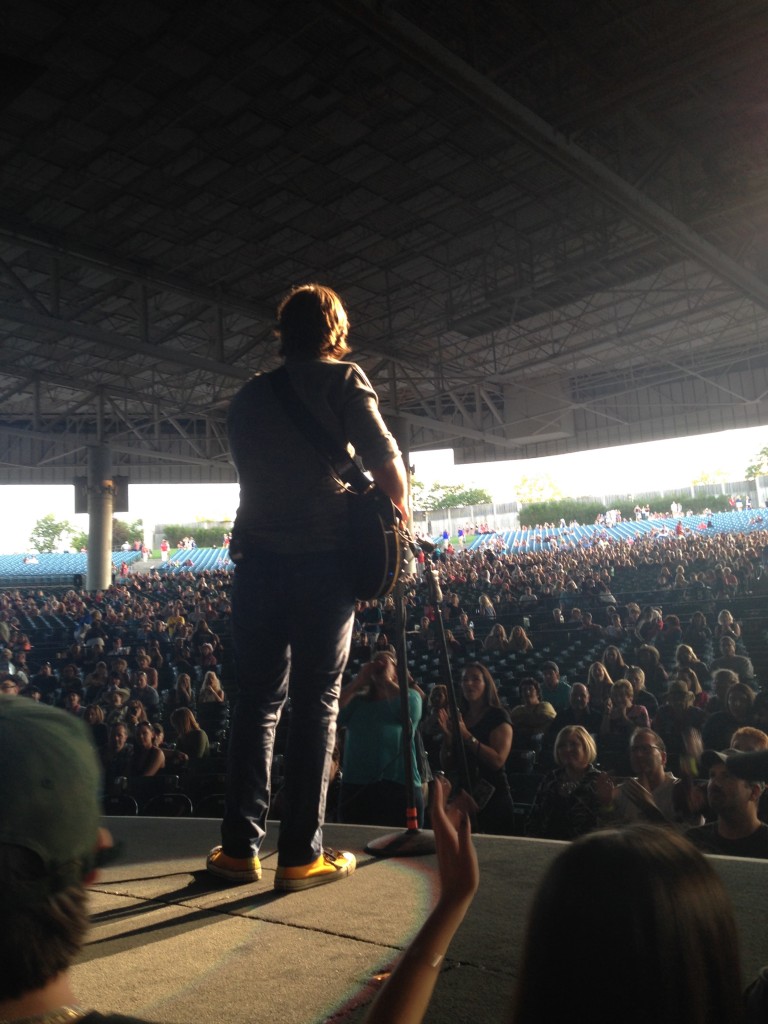 Next on stage was Leah Turner, whom is a good friend of New England Country Music. A few weeks back, Leah sat down and chatted with NECM, and her personality was simply infectious. Before the show on Saturday night, I got the chance to meet Leah and she is even more of a sweetheart in real life than I had expected. When she got on stage, she proved to the crowd that she is going to be a force in the country community for years to come. Leah impressed the crowd with her soulful voice as she sang her songs full of sass and girl power. Fans loved her singles, ‘My Finger,’ as well as ‘Take the Keys.’ The California native also sang a cover of the Dixie Chicks ‘Cowboy Take Me Away,’ which was a tribute to her father who is an actual cowboy. Leah surpassed all of my expectations- she sang her heart out, blew away the crowd, and made thousands of new fans doing so. 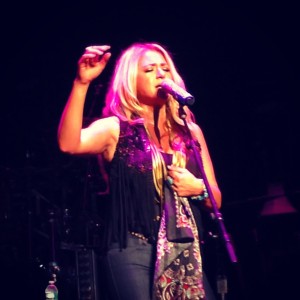 Throughout the night, Dee Jay Silver played between each of the artist’s sets. Known for his weekly ‘Country Club,’ Dee Jay Silver has taken the country world by storm by mixing some of today’s hottest country hits with traditional country songs and different beats. As a fan of Dee Jay Silver, I was excited for him to be mixing at the show. Make sure y’all and go follow Dee Jay Silver and purchase his EP on iTunes. 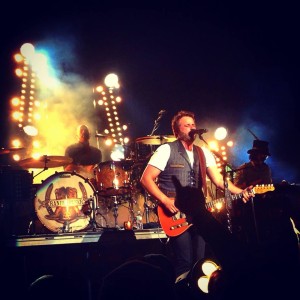 After a short intermission, Randy Houser took the stage and rocked the crowd with his set, opening with ‘Boots On.’ From song one, the crowd was involved and singing along with Randy which established the tone for the rest of his eight-song set. Houser got the crowd going with a cover of Garth Brooks’ ‘Friends in Low Places.’ He also mixed in fan favorites ‘Like a Cowboy,’ ‘Runnin’ Outta Moonlight,’ ‘Goodnight Kiss,’ and ‘How Country Feels.’ Being the first time seeing him perform live, I was thoroughly impressed with his vocals and guitar playing which made it obvious why Brad Paisley chose him for the tour. Randy will join the second leg of Dierks Bentley’s RISER tour, which will stop at Mohegan Sun on November 15th.

Shortly after 9PM, the enormous video screens covering the back wall of the stage showed what appeared to be thrusters from a spaceship and over the speakers, you could hear a countdown. 3…2…1… the lights came up and Brad Paisley began his show with ‘Moonshine in the Trunk,’ a song off his new album. He then went into some songs off his past albums such as ‘Ticks,’ ‘American Saturday Night,’ and ‘Southern Comfort Zone.’ Throughout the night, Brad mixed in some Boston tones and encouraged the crowd to have a “wickid pissah” night and during ‘Ticks,’ he changed the lyrics to say “I’d like to see the other half of your Patriots tattoo.” One of the most amusing songs in Brad’s set was ‘Celebrity’ which showed hilarious images on the video wall such as a newspaper with a headline ‘Randy Houser & Dee Jay Silver Arrested Before Tour Starts’ as well as the iconic Brad Paisley puppet in the nude on a wrecking ball. Paisley is known as a prankster and loves to have fun with the other artists and even fans during his shows which was evident when he picked on a fan who had a Taylor Swift/Ed Sheeran background on her iPhone. Also, in true Brad Paisley form, he paid respects to both the late Andy Griffith and country music legend George Jones. 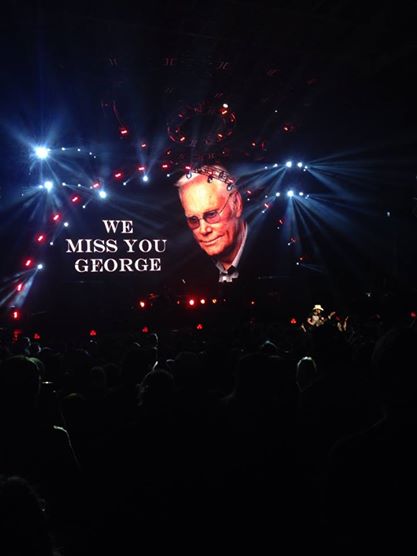 Midway through his set, Brad made his way off the stage and up the aisle to his ‘B’ stage where he entertained fans in the upper reserved section of the Xfinity Center. As he finished playing ‘Beat This Summer,’ he amazed the crowd with an incredible guitar solo before his band joined him on the ‘B’ stage. On the smaller, more intimate stage, Brad, keeping with the Boston theme, played a portion of the Cheers theme as well as his infamous love song, ‘Then.’ Brad then gave the crowd some more of his new album with a song called ‘4WP’ which stands for four-wheel park. After returning to the main stage, he played fan-favorite ‘Mud on the Tires’ and also dueled with Dee Jay Silver. With Brad Paisley on one riser and Dee Jay Silver on the opposite riser, the two went back and forth. Dee Jay Silver would play a song and Brad would have to echo the song on his electric guitar. It was extremely entertaining and it truly showed Brad’s guitar skills, especially when Dee Jay Silver played ‘Let It Go’ from Disney’s Frozen.

The duel between the two entertainers led into a cover of Van Halen’s ‘Hot for Teacher.’ Brad then played his hits ‘Old Alabama,’ ‘Water’ and ‘I’m Gonna Miss Her’ before the final song of his set, ‘Riverbank,’ which is the hit song off his new album. Fans didn’t have to wait long for Brad to return to the stage for his encore. After a very short break, the lights came up and as he usually does, he ended the night singing ‘Alcohol,’ during which his openers, friends, and family joined him on stage. 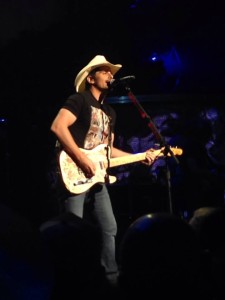 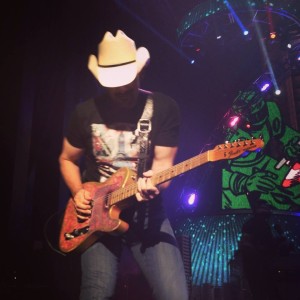 All in all, it was a fantastic show. But that is nothing new with Brad Paisley. He always entertains his crowd and gives them something to go home happy with. Charlie Worsham showed us that he loves what he does and he has the potential of being a great performer. Leah Turner showed that she can handle the big stage that matches her big voice. Randy Houser rocked the crowd. And Dee Jay Silver kept the party going in between sets when concerts are often mundane. Brad Paisley brought his Country Nation World Tour to Mansfield and New England showed Brad and his comrades what country music in New England is all about.

Did you miss the concert or just want to relive the show? Well… you can with New England Country Music!

For more photos, check out our photo album on Facebook.

Check out our Instagram page, which has tons of videos and photos.

Check out our YouTube page, which has a number of videos.

And check out our recap videos.