Ask nearly any up and coming country musician who their biggest influence is and they may say Jason Aldean, Kenny Chesney, George Strait or Garth Brooks. But not Blaire Hanks. The biggest influence in his life is his father.  “He is the man in my eyes. He is a big man and I’ve always said my whole life that I wanted to be like my father. He’s one of the smartest, hard working, good people and he’s been a huge influence on me as a person growing up.” Despite being unsigned and without any sort of booking agent, Blaire Hanks has established a fan base for himself that has allowed him to gain some incredible exposure to some of the biggest names in country music. For instance, in late July, Brian Kelley of Florida-Georgia Line tweeted out a question to his followers asking who is everyone’s favorite unsigned artist and the responses that ‘BK’ received were overwhelmingly in favor of Blaire, along with fellow country artist Jon Langston. 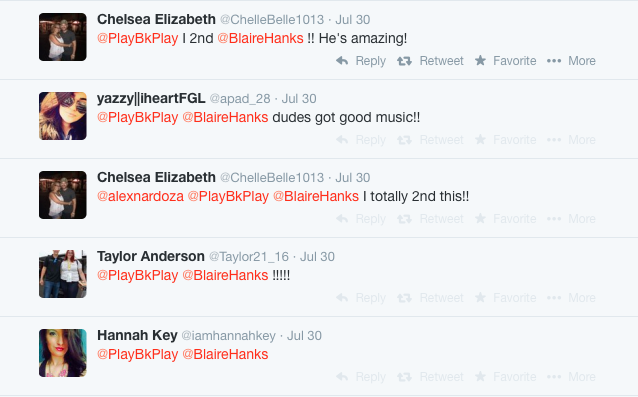 But where did this rising star come from? How did he get here?

The 22 year old singer was raised just outside of Jacksonville, in the small town of Macclenny, FL, where everyone knows everyone. He started playing the guitar at the age of six but didn’t really get into singing until he was older. He didn’t tell his friends or anyone that he even played guitar. It was his thing that he would do in his own time in his bedroom. But as he got older and people started hearing him play guitar at parties and bonfires, they encouraged him to pursue it and a few years later he would end up moving to Nashville to see what he was made of.

Blaire released his first single in January, titled ‘Show You Off,’ and is currently working on his debut album that should be available in late January of 2015. Bu growing up in Florida, it wasn’t always country for him. Blaire has a huge respect for all genres of music and that allows him to be creative with what he does with his music. But he tells us that his biggest music influences were Bob Marley and Kenny Chesney, which was also his first CD. And although he has huge respect for other genres of music, country is his favorite. Blaire describes it as a ‘good industry with good people‘ and his ‘niche.’ He likes that in country music, there are people who genuinely want to help each other and that is why he would most like to tour with Luke Bryan. “I‘ve heard that he is one of the most genuine and awesome people in the industry and is accommodating to openers and such.”

Recently, Blaire has been listening to a lot of Sam Hunt and Cole Swindell and loves all the stuff they have released. Personally, I believe that Blaire likes Sam and Cole because they both started off small as writers and for Cole, a merchandise manager, and they have both risen to country music stardom and success since then. And that’s how Blaire is starting- small, unsigned, living in Nashville, writing songs and working his tail off to reach his goal. And going forward, he would love to do a small run of college shows up the east coast.

Being an up-and-coming musician, there is one thing that may have helped him the most with his music and exposure: social media. Social media has played a huge role in Blaire’s rise from a beach boy to being on the verge of a record deal and more. Social media allows him to stay in touch with his fans and to keep them up to date with everything going on in his life. At first, he didn’t understand why his manager was pushing him to get on social media but now he does. He loves interacting with his fans on social media but one thing you may not know and that Blaire wants people to know is that he’s an appreciative person and a hard worker. “I’m a very appreciative person. I don’t take anything for granted. I work hard. Anytime a fan even favorites a tweet, they don’t realize how much I appreciate that. God gave me the talent I have, I’m going to use it for good. I want to get into charity work.” His ultimate goal is to be able to say that they did it, that they made it, and maybe to play some stadiums one day. And if Blaire maintains his positive and down-to-earth attitude, he may just do that.

And make sure y’all go on iTunes and get his music!