She is 28 years old and from Chelmsford, Massachusetts.  She loves the song, ‘Over the Rainbow,’ and outside of country, she loves Aerosmith. At a young age, she learned how to yodel after hearing LeAnn Rimes sing ‘Cowboy Sweetheart’ on a televised concert. From singing in church when she was seven years old to singing on live national television and in front of hundreds of thousands for the 4th of July festivities with the Boston Pops, she has come a long way.  It was never a true ‘decision’ that she wanted to be a singer, it was first nature.  Meet Jilly Martin: a local woman who is chasing her dream of becoming a country star.

Growing up, Jilly’s biggest musical influence was her grandmother. Her grandmother had her singing by the piano as soon as Jilly could talk and was at every show that Jilly performed at. Now she is influenced by all sorts of artists across all genres but in country music she credits Miranda Lambert, Kacey Musgraves, Sugarland, Patsy Cline, Loretta Lynn, and Dolly Parton. Her first concert was Loretta Lynn at the Lowell Memorial Auditorium- the same night that Jilly’s friends were at a Backstreet Boys concert and couldn’t convince Jilly to come with them. Jilly’s response? “The Queen of Country is playing in the town next door… why would you want to miss that!?”  Years later, Jilly actually got the chance to open for Loretta at the Indian Ranch in Webster, which Jilly said is her favorite memory as a musician. She describes,  “Miss Loretta Lynn came off the stage and said, “Well, honey, I love your blouse.” I just about died!” From her first concert to opening for Loretta Lynn, it was a full circle for Jilly.

Jilly has gotten numerous other opportunities to open for today’s country stars such as Josh Turner, The Band Perry, Justin Moore, Eric Church, and Miranda Lambert. Her favorite one was opening for Eric Paslay at the Hard Rock Cafe in Boston. “Eric was one of the nicest people I’ve met so far. He spent a lot of time talking songwriting and offering great advice. I’m so thankful to WKLB for that opportunity!” This wasn’t the first time that Country 102.5 gave Jilly an opportunity. In 2012, Jilly entered a contest to sing a duet with Billy Currington at the Tsongas Center in Lowell. And she won! Jilly says, “That night was such a blast! WKLB made it such a special event!  It was such a whirlwind that I’m glad they were actually able to capture it on film. There was something so special about performing at the Tsongas Center where I worked, where I went to UMass Lowell, and had so many friends and family with me that night!”

The singer-songwriter splits her time between Nashville and back home in Massachusetts. She balances the two by making sure she sets aside time for those who she really cares about.  “That’s what always makes the music worth it… being able to share it with the people I love,” Jilly says. If you ever get to visit the Music City, Jilly recommends eating at the Loveless Cafe (especially for great biscuits), and seeing a show at the Station Inn. Another cool place to see a show is at Antique Archaeology- home of the famous American Pickers television show on the History Channel.

Despite playing at these venues in Nashville, when asked what her favorite venue is that she has played at, Jilly comes back home to Massachusetts. The Hatch Shell at which she got to perform with the Boston Pops for the 4th of July festivities. Jilly says, “I can’t think of a higher honor, being from Chelmsford, MA, and getting to play at one of our state’s biggest musical events of the year.” 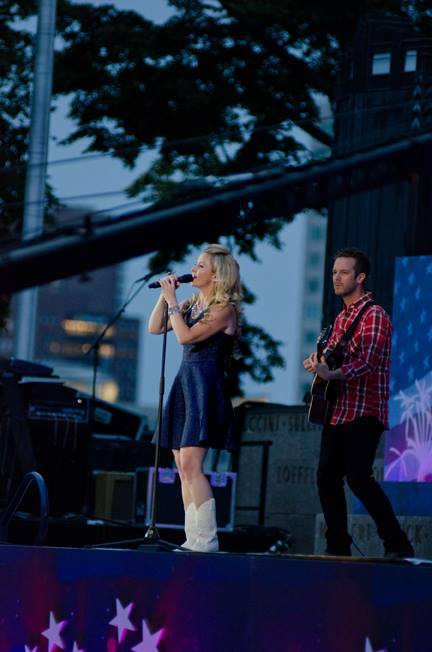 Jilly describes her music as traditional but with a bit of pop-country. “It’s Miranda Lambert meets Patsy Cline.” Rightfully so, as she lists both as her musical influences and also says that out of any artist, she would most want to tour with Miranda.

If she wasn’t a musician, the UMass Lowell graduate would use her business degree and her love of event planning to plan concerts. She just can’t live without music. So if she could plan her own ‘Countryfest,’ what three to four artists would she choose? Chris Stapleton, Vince Gill, Miranda Lambert, and Garth Brooks.

Jilly dreams of one day playing at the Grand Ole Opry but until then she will keep playing shows, writing new music, recording, and will continue doing what she loves- music.